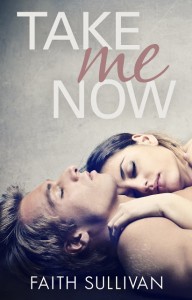 Take Me Now is the first book in a trilogy by Faith Sullivan.  it centers around Ivy and Eric.  Ivy has just started an internship at the Gazette where her good friend’s Ryan’s stepsister is the boss.  Eric owns a landscaping shop and is a bit of a local celebrity because recently he lost his fiance and baby to cancer and he has kind of been in hiding since.  Ivy has to interview Eric as one of her assignments for the paper and they end up developing some sort of relationship.  But her boss Lauren will stop at nothing to keep them apart because Lauren wants Eric all for herself.

Meanwhile, Ivy is also talking with Will – a guy that she had a crush on that is back home working at the movie theater and setting up a screening.  She wants to help him too but does he have feelings for her as well or is he just using her to further his own agenda?  Ryan also tells Ivy some personal things he has been thinking about her and now it seems that she has too many guys interested in her and Lauren is of course trying to use this all to her advantage to keep Eric and Ivy apart.

Ivy knows if she continues things with Eric – she will lose her internship and possibly screw up her whole college career in the process because Lauren won’t be wanting her to stick around.

This was a relatively short book but it had a lot going on in it.  I really enjoyed it and I am interested to see how things continue in book 2 and what will happen with some of the “twists” that were revealed. (That I won’t reveal here because you need to check out the book for yourself!)

How do you survive the internship from hell?
Don’t fall in love.
Ivy thought being a reporter-in-training at the Independent Gazette would be her dream summer job. Little did she know, interviewing Eric, a landscaper with a heart of gold, would derail her plans. It turns out Ivy’s boss, Lauren, has been eying his chiseled physique for quite some time.
But at twenty-four, Eric already has a tragic past, one that he is still reeling from. Even though his ordeal turned him into some sort of local celebrity, it’s been a while since he’s shared his bed with anyone. When he comes to Ivy’s rescue out of the blue, it’s not long before the two of them start seeing each other behind Lauren’s back. When they get caught, Ivy’s journey toward a college degree is jeopardized and her relationship with Eric is severely put to the test.
Career versus love? In the end, a shocking turn of events provides Ivy with a revelation she never saw coming.