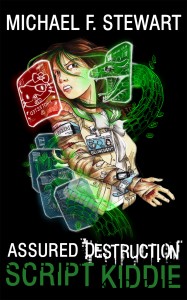 Assured Destruction: Script Kiddie is the sequel to Assured Destruction which I reviewed in April.  In this book Jan needs to fulfill 2000 community service hours and ends up on the High Tech Crime Unit of the police force, in hopes she can use her skills to help solve crimes.  She is first put on a case about credit card numbers being stolen but after going a bit over the top with her “undercover” research she is instead given a laptop to profile a murderer.  When there is a mix up with the laptops she thinks that she will be serving at a soup kitchen instead because her “services” are no longer working out for the police.

Meanwhile, she tries to find out information from a hacker forum which leads to her school being hacked and of course, blame gets put on her.  One of her classmates also tries to get her to help because she met a guy online that won’t stop bugging her.  When the friend tells Jan to back off that everything is fine, Jan of course doesn’t believe her and hacks into his computer and web cam.  When she goes to retrieve the data, things get really, really crazy.

I really love the character Jan and how she just can’t help herself from getting into these wild situations.  She seems to have everyone’s best interests in mind, but no one else seems to think that is the case! She is learning how to use her skills as a hacker and since she is only 16, if she keeps at it, she will probably do something big!  Now if only she can manage to not miss any more school, so she doesn’t have to repeat!

Assured Destruction: Script Kiddie Book Summary:
Jan Rose no longer steals data from the old computers she recycles. She doesn’t need to. As the newest member of the police department’s High Tech Crime Unit, the laptop of a murderer has landed on her desk. Her job: to profile and expose a killer.

But that’s not all.

A creep lurks in the shadows, stalking a friend, and Jan must stop him before the hunt turns deadly. The clock counts down for Jan to save her friend, her job, her boyfriend—maybe even her life.

Michael F. Stewart’s Bio:
After crewing ships in the Antarctic and the Baltic Sea and some fun in venture capital, Michael anchored himself (happily) to a marriage and a boatload of kids. Now he injects his adventurous spirit into his writing with brief respites for research into the jungles of Sumatra and Guatemala, the ruins of Egypt and Tik’al, paddling the Zambezi and diving whatever cave or ocean reef will have him. He is a member of the International Thriller Writers and SF Canada, and the author of the Assured Destruction series, 24 Bones, The Sand Dragon, Hurakan, Ruination and several award winning graphic novels for young adults.