August 6, 2013 by ConcertKatie No Comments 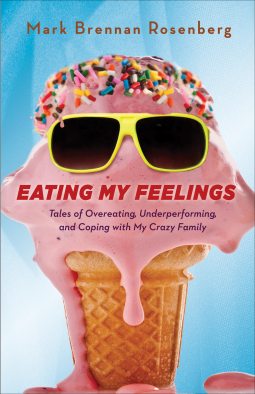 Eating My Feelings is the autobiography of Mark Rosenberg.  Before picking this book to review, I knew nothing about him.  In fact, I just thought that the ice cream on the cover looked good and that is why I chose to read it.  I do tend to screw myself over when I “judge a book by its cover” but this was a good pick!  Mark’s family is a little bit crazy – I couldn’t even really follow his family tree.  But basically all you need to know is that his parents got divorced and his dad married an evil stepmother that he was convinced was out to kill him.  There are several hilarious stories with proof of how she wanted to kill him.

After dealing with being a fat kid, going to fat camp and being paid by his evil stepmother to lose weight and eat gross food, we find Mark as adult where he realizes that he is eating his feelings.  He is a great writer and I really couldn’t help but want to read this book.  Each chapter starts with a superhero-esque paragraph… “when we were last with our heroine” type things that I thought were a nice touch to each of the chapters.

Mark is a writer and blogger and now I guess I’m going to have to go check out some of his other works because I just loved his writing style.

New from the author of Blackouts and Breakdowns–and in the tradition of Josh Kilmer-Purcell and Chelsea Handler–a collection of funny essays skewering the author’s struggles with weight and body image, both as a kid in the 1980s and as a gay man in the 2000s.

Mark Rosenberg has had more ups and downs with his weight than Oprah–but unlike Oprah, no one gives a sh*t. Coming of age very outrageously as an overweight, soon-to-be gay kid, he learns to relate to others by way of his beloved Melrose Place and Clueless–which serves him well when exiled to fat camp and  faced with an opportunity to bribe an adulterous counselor or poison his stepmother by birthday cake–and thinks nothing of dressing as Homey the Clown (in blackface) for Halloween. This sets him up for adulthood in the image-obsessed world of gay men in New York City, where he hires personal trainers he wants to sleep with, applies an X-rated twist to Julie & Julia in an attempt to reach blogger stardom, and has an imaginary relationship with the man on the P90X workout infomercials that becomes a little bit too real. Hilarious, heartwarming (as if), and especially scandalous, Eating My Feelings leaves no stone unturned and no piece of red velvet cake uneaten.