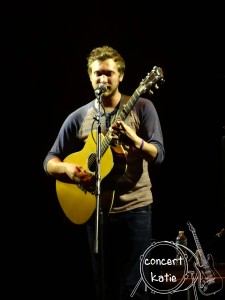 Mayer is Back!!! For those of you not in the know – John had to take some time off because he had a granuloma on his vocal chord that needed to be dealt with.  When he thought that he was ready to come back he scheduled a tour (to which I had tickets for 2 dates) and then had to cancel it because he was still having trouble and had to have more surgery.  There were no guarantees that he would come back from the surgery so the fact that he has been doing this tour and has a new album coming out on the 20th is amazing news.

I was beyond excited for this show. I had been looking forward to it for months.  But I tried not to hype it up too much because there was always a chance that he wasn’t going to be the same.  I had checked out some setlists and picked out some songs that I was hoping I’d hear based on what he seemed to be playing (a good mix though, it seemed) and he did do just about all that I was hoping for. But let’s not get ahead of ourselves.

Opening for the evening was American Idol winner Phillip Phillips. Now, normally I am beyond excited to see Idol contestants but I am *so over* Phillip Phillips.  I’m glad he’s doing well but his songs are just so, so overplayed.  His first song – I don’t know what it was, but it surely sounded like Dave Matthews to me.  Then he did Gone second which I guess was cool.  Get it out of the way early.  When I was just about to tweet that I was still over him, he did a pretty cool cover of Michael Jackson’s Thriller.  He ended the set with what seemed like a 10 minute rendition of Home. I loooved that song so much at first. Then Top 40 radio got their hands on it.  Overall he seemed to have small pockets of the crowd incredibly entertained and dancing and like other Idol winners in the past, he has cornered the cougar market quite well for himself.

Then it was FINALLY time for John!  Behind the band were these HUGE rocks.  The sheet covering them was getting all hung up on it when the roadies were trying to take it off.  John kicked off the evening with Queen of California – and he was back!  He sounded just about the same to me and of course there was no difference in his playing.  He went into a cover of Lay Down Sally next and then Paper Doll – which was followed up by Half of My Heart which I thought was interesting since he did Half of My Heart with Taylor Swift and Paper Doll is supposedly about her.  Was that some sort of secret clue? Or am I reading too far into things? ha. 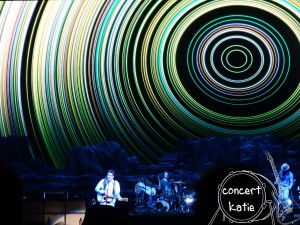 There was a definite mixture throughout the rest of the show and at times he completely seemed to lose EVERYONE.  Usually I am the only one sitting to take a break but 3-4 times throughout the night I sat and then everyone in front of me did too and I could still see perfectly from my seat.  Great for me, kind of weird for John I guess though.  I got super excited about 2 notes in when I realized he was playing Vultures.  He followed that up with an acoustic set where everything was black behind him and he did Tom Petty’s Free Fallin’.  Then he said he’d do songs from signs and did 83 (or I think he said he’d do as much of it as he could, which was the majority of the song) and then he went in to Your Body is a Wonderland! I know he doesn’t do this one all the time but obviously I was very much looking forward to that one.

After they came back – it looked like the rocks were gone.  I asked my friend and she said no they were real but I thought they now looked fake. Then they zoomed out on the screen so I guess they snuck the rocks out while we weren’t paying attention during the acoustic set.  Waiting on the Day was a new song that he did based on a sign that a kid a couple rows in front of me was holding up.  The kid was super, super excited about that.  During Goin’ Down the Road Feeling Bad I got excited because “my car” was in the video montage of the highway for a couple of seconds!

For the encore he came back and did Gravity – which was another that I absolutely wanted to hear.  He ended up playing I think roughly 9:15 to 11:45. I obviously could have stayed there all night, but you know he has a whole rest of the tour to do 😉  At the end they had “credits” for the production which was pretty neat with who did what for the tour. 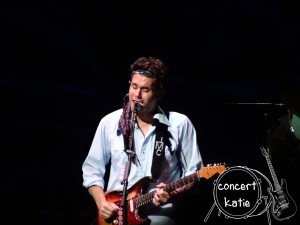 Then the lights came on and another exciting night had come and gone.  The only thing I will say I miss was that he seemed to cut back a bit on his joking/banter.  When he did talk, it was a lot of thank you for sticking around which was to be expected. And to be honest I didn’t even realize that it was “missing” until we listened to the recording of the show that we went to in 2010 and started comparing.  I’m not holding it against him at all but I figured it was worth noting.

Also worth noting – if you come to a concert and are proclaiming yourself “a huge John Mayer fan” PLEASE, PLEASE, PLEASE do not talk throughout his whole set defending WHY you are a huge fan and what CDs of his you have and what songs you want him to play.  This conversation is much better left for in between the opener and John or on the ride to the show or before the show even started or hell, even on the way home you can discuss what you wanted to hear and didn’t.  But not during John and so loudly that it is all the people around you will hear.  I understand you also called yourself a huge douchebag – but you didn’t also need to prove WHY.  We get that you’re a John fan because if not, well, you probably wouldn’t be at the show. So hush up and take it all in.