Book Review: By Faith, Not By Sight 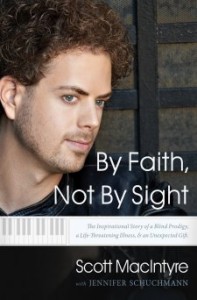 I was first introduced to Scott MacIntyre when he auditioned for American Idol back in 2009.  (He was a finalist the year Kris Allen won the title.)  When I heard that he was releasing a book, I knew that I had to check it out.

The book talks about his life and doesn’t really focus all that much on his Idol journey.  As a child, he was a bit of a musical prodigy, with perfect pitch he would listen to songs and memorize them in order to play them. Being blind, he couldn’t read sheet music so he of course had to find a different way.

At age 6 and 7, he was playing piano and performing at weddings! He was homeschooled and ended up graduating from college at age 19.  When he was getting ready to get his Masters at Cambridge in London, everything seemed to be going wrong in his life.  Told he was in at school, he received a rejection letter instead and on his graduation day he found out that he was in stage 4 kidney failure.

But he didn’t let that stop him! He worked out a new plan to go to London for school and got the OK from his doctors to go out there despite the kidney issues.

But his condition got worse and worse even though they had hoped it would just go away (no one could figure out the cause of it) and he needed to undergo emergency dialysis surgery and then needed to get a kidney transplant.  Since he could be on the transplant list for years, doctors suggested he find a live donor.  Many volunteered and he ultimately got a transplant.

Then he and his siblings decided to audition for Idol.  First they auditioned in San Francisco, with none of them making it through.  Even though they were rejected the first time, they decided to try again in Arizona.  This time all 3 of them made it through, but ultimately only Scott made it through later rounds to make it in front of the judges.

While Scott was having the experience of a lifetime participating on Idol – as the first disabled contestant – his younger sister Katelyn was sick.  It turned out that her kidney was also failing and she would need a transplant.  The family hoped that they could find a live donor and not have Katelyn need to go on dialysis like Scott had.

Throughout the book Scott mentions that his dream was always to go on tour and perform in arenas.  American Idol made  that dream come true for him, against the odds.

This was a great book and I really didn’t know the details of his life beyond what we were showed on Idol.  It was a quick read too – I had no problem reading it in about half a day! I definitely recommend this book to anyone looking for a great Faith based book or anyone who is an Idol fan!

A moving story of hope, faith, persistence and the power of dreams.

A piano prodigy, a nineteen-year-old college grad, a Marshall scholar, and an American Idol finalist. This guy had it made. He could sing.

He could ski blind. What couldn’t he do?

Even if you saw him in concert, you might not believe that Scott MacIntyre is blind, and you’d never guess that at nineteen, he faced a diagnosis that rocked his family and nearly took his life.

So how did he do it? How did he overcome the odds?

This is Scott’s story, but he’d be the first to tell you that it’s not really about him. This is the story of how God used a dedicated family, a selfless acquaintance, hardship, and a host of characters to give him life, faith, determination, and experiences most can only imagine.

Peek behind the scenes to see how he learned to overcome his disability, how he made it in the music industry, how he found the love of his life, and how God taught him that in all things, we can truly achieve our dreams By Faith, Not by Sight.