Saturday after seeing Honor Society at Garden State Plaza, I went to the Paramus Park Mall and hung out with my friend Marisa who was selling cupcakes and cookies with her new bakery Semisweet.  I had gotten a hotel for the night so I could go to a private Honor Society event on Sunday and thought it would be fun just to hang with her than in the hotel room.

I watched Eli Manning host SNL and then went to bed. At 3am I was awoken by a crazy noise and I was SO confused. I couldn’t figure out what was going on.  Turns out, it was the fire alarm at the hotel! I put my jeans back on so I wouldn’t freeze in my PJ pants and debated taking my stuff outside and then went outside by the car to wait it out. I didn’t see any fire or anything so I figured my things would be ok. About 15 minutes later a fire truck came and the alarms were turned off, but it was definitely rough getting back to sleep. (AND check out was 11 when I thought it was 12 from the site I booked the room on)

I then went to the Fireman’s Hall that the show was being held at.  There were about 20-25 people there in total and Honor Society hung out from 12-3ish.  They mingled, did photos, and then did a decently long set – although I guess it seems longer on paper because they “teased” clips of a bunch of songs that they didn’t want to perform or didn’t remember how to perform them lol  For 2 songs a bunch of the girls went up to sing while the guys played, I have videos of it which I will be sharing hopefully before I head off to Tulsa! (Trying to balance work plus photos and videos when working extra hours is not easy!)

Somehow I ended up not talking to Jason at all, and I really don’t know how that ended up happening.  Once he was coming towards me and said hi, but then a couple other girls started talking to him and a couple other times when I headed towards him he got pulled away by someone else too. I am not sure how it always ends up that I spend the least amount of time with Jason!

After the performance there was birthday cake for Alex (his birthday is the 21st) and he was singing happy birthday too and clapping and being all happy and then everyone went “Dear ALEX” and he was SO surprised the cake was for him. I hope someone captured that on video because it was hilarious.

The party cost $60 to get in to to help split the costs of booking them and I have to say it was the best $60 ive spent in a LONG time. So much fun!  One of the girls there is booking them in August so I am hoping I’ll be able to make it to that one as well – it will be a blast! 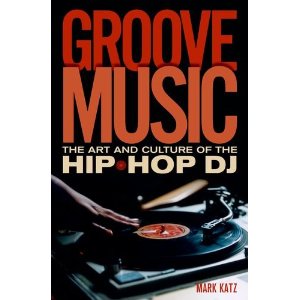 Groove Music is a book by Mark Katz.  It is about Hip Hop, but more specifically, The DJ and how DJs mixing led to hip hop and DJ battles and all sorts of fun stuff.  It actually took me a while to get through the book, I think because hip hop isn’t really my “thing”, so I don’t know as much about all the players as I do with some of the other music books I have read.

Interestingly enough, a couple of pages in I saw a familiar word – “MMMBop”!  It talked about how the single had record scratching in it, and previously that had not really been done in pop music.  I was actually so excited to see this mention that I ran off to my coworker to share.  The song is actually mentioned again a bit further in to the book and it talks about some other songs from that time frame that also brought the record scratching to more mainstream music.

I went in to the book thinking I wouldn’t recognize anything mentioned in it – but there is a lot of talk about the song “Rappers Delight”, and I actually saw Sugar Hill Gang live a while back – they opened for NSYNC.  Not sure how that pairing came about and it was only my 2nd concert ever, waaay back in 1999… so I don’t really remember much about them. (cool story right?)  But there was also mention of Fresh Prince and DJ Jazzy Jeff which I definitely listened to a ton as a kid because my mom loooves Will Smith.

The author has certainly done his research and there is a TON of info in here (even on female DJs!) and lots of pictures to go along with the text as well.  Pictures of DJs and even equipment!

I received a free e-copy of this book to review from the publisher from NetGalley. I was not asked to write a favorable review and all opinions are my own.

It’s all about the scratch in Groove Music, award-winning music historian Mark Katz’s groundbreaking book about the figure that defined hip-hop: the DJ.

Today hip-hop is a global phenomenon, and the sight and sound of DJs mixing and scratching is familiar in every corner of the world. But hip-hop was born in the streets of New York in the 1970s when a handful of teenagers started experimenting with spinning vinyl records on turntables in new ways. Although rapping has become the face of hip-hop, for nearly 40 years the DJ has proven the backbone of the culture. In Groove Music, Katz (an amateur DJ himself) delves into the fascinating world of the DJ, tracing the art of the turntable from its humble beginnings in the Bronx in the 1970s to its meteoric rise to global phenomenon today. Based on extensive interviews with practicing DJs, historical research, and his own personal experience, Katz presents a history of hip-hop from the point of view of the people who invented the genre. Here, DJs step up to discuss a wide range of topics, including the transformation of the turntable from a playback device to an instrument in its own right, the highly charged competitive DJ battles, the game-changing introduction of digital technology, and the complex politics of race and gender in the DJ scene.

Exhaustively researched and written with all the verve and energy of hip-hop itself, Groove Music will delight experienced or aspiring DJs, hip-hop fans, and all students or scholars of popular music and culture.