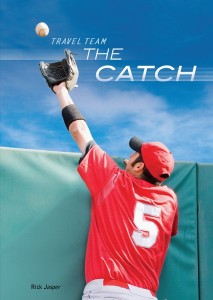 The Catch by Rick Jasper is a fictional young adult novel.  When the story starts, Danny has already made “The Catch”, it has gone viral online and he is rising in popularity.  Ocelot sports gear offers Danny a contract to use their gear during his games and appear in their advertising.  He talks it over with his father and decides to go for it, as long as the company back home currently advertising is ok with it.  Ocelot says they will sue the company back home if they don’t allow it. (This should have been Danny’s first tip off that perhaps this wasn’t the best idea.)

Danny begins to be featured in ads and believes to be making money off the deal (his dad is in charge of all that though).  The guy from Ocelot tells him to show off the gear when he makes plays, giving him a doorag to wear under his hat and some spotted Ocelot shoes.  His coaches aren’t too in to this and ban him from playing unless he wears black shoes.  This of course all works out in Ocelots favor, but are Danny’s teammates getting fed up with his special treatment?

When trying to show off on a play, the ball ends up hitting Danny in the head knocking him out.  Is this what he needed to get some sense knocked into him?

This was a great quick read and would be a great summer book for your child who is a baseball player or fan.  It definitely teaches some great lessons and was fun to read.

When Danny makes “the catch,” everyone seems interested in him. Girls text him, kids ask for autographs, and his highlight play even makes it on SportsCenter’s Top Plays. A sports-gear executive tempts Danny with a big-money offer, and he decides to take advantage of his newfound fame. Danny agrees to wear their gear when he plays. But as his bank account gets bigger, so does his ego. Will Danny be able to keep his head in the game?