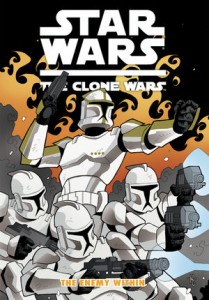 Star Wars The Clone Wars: The Enemy Within is one of the first comic books I’ve read on my Nook Tablet.  I have to say I was not all that impressed with the quality, it was incredibly difficult to read some of the dialogue, and making the pages larger made the problem worse, not better.  Pages became more fuzzy the bigger I made it.  I think I would enjoy comic books on the nook a lot more if they were a bit more HQ. (Or maybe HD?)

That being said, the illustrations in this book were great.  The story is about a gang of Clone Troopers whos mission goes bad and they end up being attacked by Drones and them some other large green Chewbacca looking things.  There’s a bit of a subplot as well, but I don’t want to give too much away (and who knows how much I missed making up words when I couldn’t make out a bubble of text)

You can preview this comic at Dark Horse Comics website: http://www.darkhorse.com/Books/19-465/Star-Wars-The-Clone-Wars–The-Enemy-Within-TPB

I think I might stick to comic books in “real life” instead of on the Nook, although I do have one more to check out.  I received a free e-copy of this book from the publisher in order to write this review.

Spearheading a bold, covert mission intended to bring an end to the fighting on a war-torn world, a platoon of Clone Troopers find their plans undone by faulty intelligence and bad luck, and themselves stranded deep inside hostile territory. With no choice but to see their flawed mission through to its end, the ragged soldiers make their final push toward their target, unaware that their victory could spell disaster for the Republic!