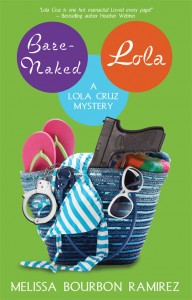 Lola Cruz is a private investigator.  She gets hired by The Royals to investigate mysterious and threatening notes that the Royals Dancers have been receiving.  In order the find out more information about what is going on, she joins the dance squad replacing one of the team members that left around the time the notes began.

While working on the case, one of the dancers gets killed just after Lola was talking to her.  While the entire team was shocked over her death, one of the team members confides in Lola and lets her know that both she and the dancer that was killed were both members at a local nudist resort.

Now Lola has to decided if she wants to bare it all in order to get more clues to figure out who was sending the notes and who killed Jennifer.  She ultimately decided that solving the case and making sure that none of the other dancers end up hurt or killed as well.

This was a very fun mystery book to read – humorous at times as well.  Lola is latina and does use a lot of Spanish phrases.  Some I knew from takin spanish classes and others I had no idea what they meant.  I didn’t bother to look any of them up, it didn’t really make the story any harder to understand if I didn’t. I would definitely recommend this book anyone looking for a fun mystery book for the summer!

I received a free e-copy of this book from the publisher through Net Galley in order to write this review.

Going undercover is second nature for Private Investigator Lola Cruz, but she’s out of her league when the case of a murdered Royals Courtside Dancer leads her to a local nudist resort. Parading around the sidelines of Sacramento’s professional basketball scene in a barely-there cheerleading outfit is one thing—but parading around in nothing but smile? If she has any chance of hiding this from her traditional family and on-again/off-again boyfriend Jack, she’s going to have a lot more than her duct tape bra and killer dance moves to keep under wraps….