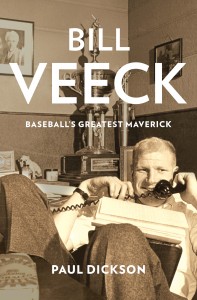 Bill Veeck: Baseball’s Greatest Maverick is by Paul Dickson. Having grown up with his father working for the Cubs, Bill said that one day he would own a baseball team.  He got his start working with the Cubs and Mr. Wrigley and is responsible for early renovations done to the ball park – including the ivy in the outfield.  After running his course with the Cubs, he moved on to work for the Milwaukee Brewers, who in a way were teamed up with the Cubs – he got players from the Cubs for the Brewers, guys that were benched but might do better with another ball club. At the time, the Brewers were a minor league team.

He had said he was going to buy the Phillies and have an entire roster of negros filling the field, but ultimately went to war to serve his country instead.  He was honorably discharged after receiving an injury that ended up with him losing his leg.

He moved on to the Cleveland Indians and tried to come up with many ways to get the fans to the ballpark.  He even listened to their pleading when there was talk about possibly trading a player that was beloved to the fans.  Over the years he owned an worked with several other teams, trying to come up with ways to get fans in the seats as well as giveaways.  Some of his ideas were so outlandish he has even been called “The Barnum of Baseball” (though his son Mike does not like this nickname for his father.)

Bill was a fascinating man and I think that is very well documented in this biography.  Dickson did a great job capturing Bill’s life and although the book is 300+ pages, it definitely kept my interest the whole time.  Before reading this book I was not aware of who Bill was, but now I know all there is to know about him and can still see the mark he left on baseball evident even today, 20something years after his death.

The first major biography of one of the greatest figures in baseball history.

William Louis “Bill” Veeck, Jr. (1914-1986) is legendary in many ways-baseball impresario and innovator, independent spirit, champion of civil rights in a time of great change. Paul Dickson has written the first full biography of this towering figure, in the process rewriting many aspects of his life and bringing alive the history of America’s pastime. In his late 20s, Veeck bought into his first team, the American Association Milwaukee Brewers. After serving and losing a leg in WWII, he bought the Cleveland Indians in 1946, and a year later broke the color barrier in the American League by signing Larry Doby, a few months after Jackie Robinson-showing the deep commitment he held to integration and equal rights. Cleveland won the World Series in 1948, but Veeck sold the team for financial reasons the next year. He bought a majority of the St. Louis Browns in 1951, sold it three years later, then returned in 1959 to buy the other Chicago team, the White Sox, winning the American League pennant his first year. Ill health led him to sell two years later, only to gain ownership again, 1975-1981. Veeck’s promotional spirit-the likes of clown prince Max Patkin and midget Eddie Gaedel are inextricably connected with him-and passion endeared him to fans, while his feel for the game led him to propose innovations way ahead of their time, and his deep sense of morality not only integrated the sport but helped usher in the free agency that broke the stranglehold owners had on players. (Veeck was the only owner to testify in support of Curt Flood during his landmark free agency case). Bill Veeck: Baseball’s Greatest Maverick is a deeply insightful, powerful biography of a fascinating figure. It will take its place beside the recent bestselling biographies of Satchel Paige and Mickey Mantle, and will be the baseball book of the season in Spring 2012.

Paul Dickson is the author of several classic baseball books, including The Dickson Baseball Dictionary, The Unwritten Rules of Baseball, The Hidden Language of Baseball, and The Joy of Keeping Score. He is also the author of the classic narrative history Sputnik: The Shock of the Century, and the co-author of the acclaimed The Bonus Army: An American Epic. He lives in Garrett Park, Maryland.