January 31, 2012 by ConcertKatie No Comments 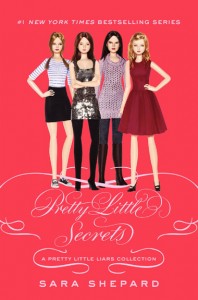 Everyone’s  favorite Liars are BACK in Pretty Little Secrets by Sara Shepard. This book goes in between books 4 and 5 and is a supplemental book.  Secrets takes place during Christmas break which had previously not been mentioned in the series.  The first A has been found out and is mentioned in this book, so you might want to hold off on reading it until you have read at least books 1-4, but if you are further in the series it won’t give anything away.

It looks like there is a new A in town, and he/she/it is watching our Pretty Little Liars.  Each of the girls has her own section of the book which goes for about 16 chapters, which is different than the rest of the books in the series that alternate chapters.  I enjoyed reading one story all at once though, it was easier for me to follow.

Hanna is trying to adjust to her step mom, Dad and step sister moving in.  While her boyfriend is away on vacation with a girl who she thinks may be a threat, she joins a boot camp at the gym to shed some extra pounds.  She kind of falls for the instructor, but her boot camp partner does as well so a lot of the section goes back and forth with her and her boot camp partner fighting over this guy (since Hanna assumes Lucas has ditched her for the threat because he is making no contact with her whatsoever after saying he would contact her every hour!)

Emily gets a job at the mall in Santa Land as Santa in an effort to find out information abou the “Merry Elves” a gang that is stealing Christmas decorations off of front lawns.  The 4 elves are a bit older than Emily, but she manages to get in their good graces and is invited to a party after covering for one of the elves with their boss.  Eventually she is invited along on one of their trips to take decorations and she decides to go along and participate, not capture all the evidence on video for her mother and her boss (who have had items stolen).  The girls get caught and Emily saves the day once again, getting them out of jail by working a little magic.

Aria is upset after her father takes her, her brother and his new pregnant wife on vacation and is told they will all be sharing one room!  She goes back alone to Rosewood, only to be greeted by Hallbjorn, her boyfriend from her time living in Iceland! He tells her that the Iceland police are after him and they get the grand idea to go to Atlantic City and get married.  While there, he releases the panthers from one of the live shows and Aria comes clean that the signatures on their license were forged, voiding their marriage.  She comes home to find out he has done a lot more than he had admitted to in Iceland which is why he is wanted by the police!

Spencer is spending some time at her Nana’s home by the beach. She meets a cute tennis player and they seem to hit it off, although he has a girlfriend.  When things seem to be on the rocks with him and his girlfriend, Melissa and Spencer devise a plan to get her Colin.  Except that after the break-up – Colin chooses – Melissa??  Spencer and Melissa fight, even though Spencer thought their relationship was improving.  When it turns out that Colin has a WIFE and CHILD and is 33 years old! the two sisters work together to bring Colin down and his chances at becoming a tennis star.

I really love these characters and love that books keep coming out even though the series was originally only supposed to be the 8 books.  It is a little confusing  to be reading the books and watching the show at the same time though! (This book came out the day after the winter premiere aired.)  Also, I think the timeline might be a little off with the books now since this book had some current references that I don’t think fit in if you’re actually paying attention to the timeframe with the older books, but those were easily overlooked!

Rewind to junior year in Rosewood, Pennsylvania, to a winter break no one has ever heard about. . . .

Fat snowflakes fall onto manicured lawns, quilted stockings hang over marble fireplaces, and everyone is at peace, especially Hanna, Emily, Aria, and Spencer. Now that Alison’s murderer is in jail and A is dead, they can finally relax. Little do they know there’s a new A in town. . . .

Rule number one of being an effective stalker: Get to know your prey. So I watch these liars day and night, keeping an eye on the trouble they get into, the messes they make, and the secrets they keep. Hanna’s desperate for a very personal session with her gym trainer. Emily is number one on Santa’s naughty list. Aria’s old flame from Iceland is about to land her in hot water. And Spencer’s resorting to some backhanded tactics to get what she wants.