February 1, 2012 by ConcertKatie No Comments 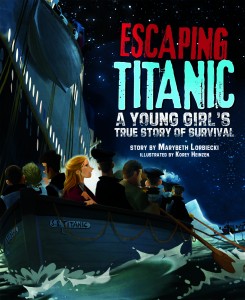 As you will see over the next few days, I went a little crazy with reading about the Titanic lately.  This is book 1 of 3 for this week about Titanic with other reviews coming in later months as well.  Today I’m writing about Escaping Titanic by Marybeth Lorbiecki.  It is a short book, aimed for children, about a young girl who survived the sinking of the Titanic.  Her name was Ruth Becker, she was 12 years old and traveling with her sister Marion, brother Richard and mother.  Her father had to stay behind.

When the Titanic struck the iceberg, Ruth’s mother was instructed to come to the lifeboats.  Ruth got separated from her family and was forced to get on a different lifeboat. (Her mother said they had to get off the boat, even though some people opted to stay on the boat knowing that another boat would be coming to their rescue.)

I liked that this book, though geared towards children, didn’t really sugar coat what was going on and mentioned all the dead bodies that ended up in the water just as Ruth saw it.  I also found it interesting that Ruth became a teacher, but didn’t tell anyone that she was on the ship – not even her children!  Once she heard the talk that there were people looking for the Titanic, she decided to tell her story.

Commemorate the Titanic’s disastrous voyage with this harrowing tale of survival. Follow the true story of young Ruth Elizabeth Becker as her awe of the mighty Titanic turns to horror when she is separated from her mother and siblings.

Twelve-year-old Ruth Becker is sailing on the Titanic’s maiden voyage. The unsinkable ship’s luxury is behond her wildest dreams.  But in the early morning hours of April 15, 1912, Ruth and her family are suddenly aware that the grand ship is in trouble.  Her mother, brother and sister escape on a lifeboat, while Ruth remains on deck.  Will she be stranded on the Titanic?

Marybeth Lorbiecki, M.A., is an adjunct professor at the University of Wisconsin-River Falls, teaching upper level college writing and children’s literature. She has always loved history and topics that deal with how people interact with each other and with the natural world. Marybeth grew up in St.Cloud, Minnesota, went to the College of St. Catherine and later Mankato State University and eventually the University of Essex as an International Rotarian Scholar. She has had various jobs, including book editor and teacher. She presently lives with her husband, David Mataya, and three children in Hudson, Wisconsin.