January 27, 2012 by ConcertKatie No Comments 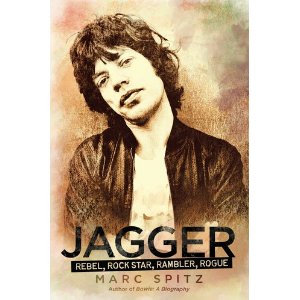 I love reading stories that relate to musicians, groupies, etc.  Jagger by Marc Spitz had all of that in it.  As you probably know, Mick Jagger is the lead singer for The Rolling Stones.  What I thought was funny – it mentioned that in an interview Mick once said that he thought the band was going to last for two years!  I’m not sure what kind of calendar he is using – but they certainly surpassed Mick’s expectations in longevity!

As with most bios, the book chronicles Mick’s early life (he was born Michael and went by Mike before he went by Mick!) and the forming of the band, life on the road, girlfriends, wives, children, etc.

The book was very well written, just over 300 pages with 21 chapters and an intro and epilogue too!  The stories were all very interesting and I enjoyed reading it.  (Although I’ve been reading a lot of music related books lately, some of which you won’t see reviews of for a few more months because they haven’t been released yet – and with so many of the same players being mentioned because they all take place around the same era, it is getting a bit confusing! I’ll have to pick a new topic to read next to clear my brain a bit!)

A biography and cultural examination of the Rolling Stones’ frontman Mick Jagger’s spectacular life and the cultural revolution he led.

As the Rolling Stones’ legendary front man Mick Jagger remains an enigma. He hasn’t given an in-depth interview for a decade and a half and never commented on his friend and partner, Keith Richard’s often critical biography. Drawing on firsthand recollections from rockers, filmmakers, writers, radicals, and other artists who have been transformed by Mick Jagger’s work, acclaimed music journalist Marc Spitz has created a unique examination of the Jagger legacy, debunking long held myths and restoring his status as a complicated artist. Combining biography with cultural history, Jagger unfolds like a captivating documentary, a series of episodes tracing the icon’s rise from his childhood in middle-class postwar London to his status as a jet-setting knight.

A culturally astute, often funny, and painstakingly researched read, Jagger offers a far richer portrait than biographies published previously. The book reveals much about his relationships (with Marianne Faithfull and ex-wives Bianca Jagger and Jerry Hall); his complex, creative partnership with Keith Richards; his friends like John Lennon and David Bowie; and enemies like Hells Angels leader Sonny Barger. Spitz goes even deeper, exploring Jagger’s many roles: an authentic soul man; powerful social commentator; sexual liberator; would-be movie star; and yes, sometimes, a shrewd businessman with an enthusiasm for much younger women. The myth of Mick is examined and rebooted for the twenty-first century.

I received a free copy of the book to review from NetGalley.  All opinions in the review are 100% mine and I was not asked to write anything positive.