A few of the photos I took at the concert last night! 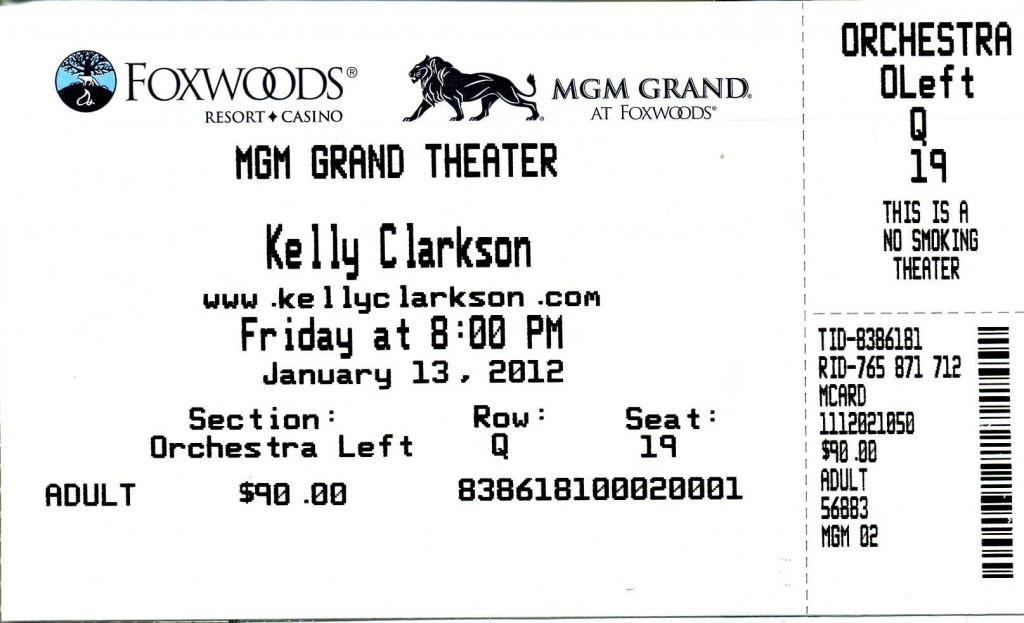 This review may contain spoilers for Kelly Clarkson’s Stronger Tour.  If you’d like to be surprised about the show, it might be best to not read this review.

Friday night Kelly Clarkson’s Stronger Tour kicked off at the MGM Grand Theater at Foxwoods in Mashantucket, CT.  For this show I had the best seats I’ve ever had at this venue, about 15 rows from the stage, but off to the left.

I had thought Matt Nathanson would be opening, but at 8:20 a song was playing over the loudspeaker and the ladies next to me informed me it was “her song” (Kelly’s) and the curtain went up and there was a screen around the stage and then a bunch of newspaper clips and headlines scrolled by and it was time for Kelly!

She kicked her set off with what I think is my favorite song off the new album, dark side.  Then she went in to a couple of older singles – Behind These Hazel Eyes and Since U Been Gone.  Before the next song she explained that she did some we’d know to get us into the show, but then was going to do a song she didn’t do that often to make her sister and fans happy and she did hear me, gone and then you love me.

Then she ran off the stage and the screen went around again. Next thing I know she appeared in the crowd and sang Florence and the Machine’s Heavy in Your Arms.  For this tour, each night she is taking a request from twitter – and this is the part of the show where she did it.  Connecticut’s request was from Javier and he requested Cee Lo Green.  She sang “Forget You” and encouraged us all to sing along.  Then she did a medley from her older albums since she had been doing this for 10 years and has 5 albums.

The screen went down again and she came out and said that this song was added to the setlist the night before and that “jesus, lord” there are a lot of songs on the set list! But she wanted to add it anyway.  She said she did a show with Carrie Underwood and Carrie came out and sang this song and she thought that she wished she had a song like it, but she doesn’t, so she is stealing it from Carrie and sang “I know you won’t”

Then Dont You Wanna Stay started coming from the band. I wasn’t sure how she’d do a duet, but Jason Aldean popped up on the screen and sang his parts and Kelly sang hers. It was pretty neat.  Then she did Let Me Down and Already Gone.  She went in to Breakaway which she said was one of her most popular songs and encouraged us all to sing along with her.

Next up a video played with her trip to Africa and she sang a song she was inspired to write while there, which I think was called You Still Wont Know What Its Like.  I loved seeing the the footage from her trip to Africa, the kids were so cute and looked like they were having so much fun!

Then it was time for her single and the title track from the album (and tour), Stronger!  And then she went into My Life Would Suck Without You.
That seemed to be the end of the show – there were chants Kelly! Kelly! and she came back out and did Never Again and said it was one of her favorite songs and sometimes you had to go through bad situations to get good songs – not that it was a good song but it was one of her favorites and she didn’t want to come off as egotistical.  Then she teased about it again before going into a song she wrote when she was 16, Because of You.

The next song, which I figured would be the last, was Mr Know It All.   Except when the song ended, there was some mixing and the song went “mis..mister…mis…” and then Kelly sang out “MISS INDEPENDENT” ! And that was what she finished the set with.

Such a great show, and Kelly can SING.  I can’t believe it has taken me 10 years to finally have seen a full headlining show from her!

After the show, I met up with my Dad who had been gambling and was down about $30.  He brought me over to his new favorite machine and I sat at the one next to it and we figured we’d play for a bit before heading to the car because the parking garage would probably be a mess.  Next thing I know I get 4 bonuses, which means I won the “minor” kitty which was $18 and change.  Then I got 10 bonus spins and somehow ended up being at $72+ after that was done! (I think I had about $15 before I went in to the bonus round)  I played down to $70.25 and ended up taking home $50. Not bad!  My Dad also ended up winning and won about $25 making him down only about $5 for the night – which was also not bad considering he was playing for about 3 hours!

Some photos to come a bit later – I have a bunch to do so I’m not sure when I’ll get around to uploading them!