Hanging out with Ashlyne Huff

October 22, 2010 by ConcertKatie No Comments

Earlier today I was sitting around and not doing much (though I had much to do, as evidenced by the to-do list currently sitting in front of me) and I saw Ashlyne Huff tweet that she would be at KC101 and wanted to meet people.

I debated going – it said she’d be there at 12:30 and it was going to take me to about that time to get to the radio station, first I said I wished I knew sooner to have planned on going but then I decided to just be spontaneous and hopped in the car and drove.

The station is only 20-30 minutes away so even if I missed her it wasn’t like I would have gone hours and hours out of my way.

I arrived and no one was there! I went to the door and no one was around to let me in so I called to see if someone would let me in, and no one was answering.  Then someone opened the door and I told him I was there to see Ashlyne.  He had NO idea what I was talking about and went to get someone else while I was standing in the lobby.  Someone else came out and I explained that Ashlyne had tweeted for fans to come down, but if she didn’t have time I understood, I was nearby and decided to come by.  He told me to have a seat and told Ashlyne I was there and then he said she’d be right out to see me.

Then she and her manager who were in the station area with some DJs turned to wave.  Her manager is Ned, Honor Society’s former manager.  They came out from the station room and went in another room to take photos and Ned told me they’d be out to see me in a couple minutes.

Ashlyne signed a photo for me and we took a picture together and got to chat for quite a while.  It was just me, her and one of the KC101 night DJs, while Ned talked to the DJ John Mayer about sports.  I had told her that I was an Honor Society fan and saw her open for them twice, she had asked if I was at the Toad’s show and I said no, NYC and Boston so she was like “Oh you hit the big ones”.  I also mentioned I was looking for a job and had an interview on Monday.

Then Ashlyne had to go, so we walked out together and she said “Good luck again with your interview!” and then Ned started asking all sorts of questions and told me that I had to tell them “I won’t let you down” and then I’d be guaranteed to get the job.  He also told me to tweet Ashlyne to let her (and him) know if I ended up getting the job or not!

Being spontaneous worked out and when I got home I saw that Ashlyne had tweeted thanking me for coming out.  I hope she got a turnout at her stop at Kiss957 studios too!  She’s a sweet girl and her EP is amazing – can’t wait for more music.  (A new single will be coming out in January and Ned said they’d keep me informed on touring and everything else she would be doing) 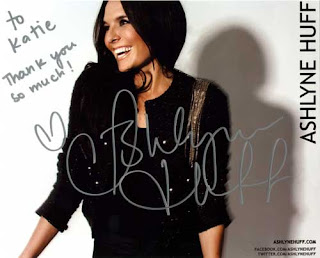