November 7, 2010 by ConcertKatie No Comments 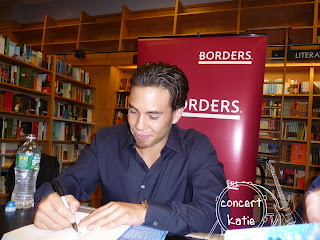 Friday I decided to head to Apolo’s signing in Providence, RI.  He was also signing later in the day in CT, but I wasn’t sure if that was going to interfere with my plans for the evening or not.
I ended up leaving the house a half an hour later than I had wanted, but made pretty good time and was set to arrive in Providence at around 11:30 and the signing began at noon.  But once I crossed into Rhode Island they were doing some work on I-95 which ended up pushing my arrival time to 11:45.
Then, once I got near the mall, I could not find the parking garage entrance for the life of me.  Finally, I ended up finding it and got a spot and ran inside to Borders.  The line didn’t appear to be that long, so I was confident I would be able to get a signature.  I bought my book and was given a Yellow wristband and told to get in line.
Apolo didn’t end up showing up until a little after 12 and then I assume went to do some press quickly before walking by us to get to the signing podium. 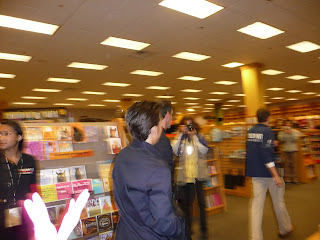 The line ended up moving really fast.  The woman behind me in line had asked at the register how everything was going to work and was told that there were 4 colors in front of her (I was the last of the yellows, she was green) and that he would sign the whole book store in an hour because he could sign 250 books in an hour!  While we waited in line we debated on if he would just scribble out an ‘A’ and an ‘O’ or if he would sign out his full name.  We were pretty sure it would end up just being initials.
The line ended up wrapping through the store a lot more than I thought it had originally, but it was moving SO fast.  Within a half an hour I was up at the podium. 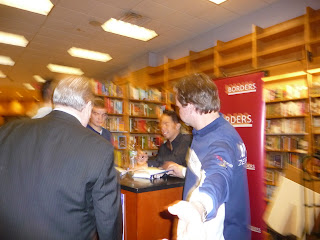 And I was being rushed to move forward. (Which is why this picture is so crazy and blurry!)  They had told us not to take any photos at the podium, but Apolo was signing my book still so I figured I’d be waiting there anyway for him to finish so I wouldn’t be holding up the line.  That is when I took the photo at the top of this post. I am glad that came out good because my others didn’t!
After he signed my book he looked up and I told him “Thank You” and he said “Sure. Take Care.” And I was ushered away.  There weren’t that many more people behind me and by the time I went to the car to put the book in there before heading back to do some eating and shopping, it appeared that everything was GONE.  No sign of there being a signing there at all!
I can not even imagine signing 250 books (or more! I think he tweeted he did 600 in New York!) in an hour. My arm would fall off after probably 10!

I can’t wait to start reading the book – but since I am doing NaNoWriMo again this year, it probably won’t be until December at the earliest. (Although probably later than that since I have a couple others in the queue first!) Since all my free time will be used to get to 50,000 words by November 30th! (I am at 10,000 so far, hoping I can continue to stay on or ahead of schedule!)