Evolution of a scrap space.

October 2, 2010 by ConcertKatie No Comments

My scrapbooking area was a bit of a mess. So much so I wasn’t scrapping using my table, instead I was scrapping on my desk. With embellishments all over the place and in no organized state, I realized my layouts were lacking.

My mother said she wanted to buy me some organization bins so I could get everything back together. I agreed, but assumed she would allow me to pick out the items as she is not a scrapper and therefore doesn’t really know which items would be the best.

Except, when I went away for the weekend to see Hanson, she decided it would be a great time to organize everything on me. I was not happy, but since I came home without a voice it was hard for me to really voice my opinion on the matter. 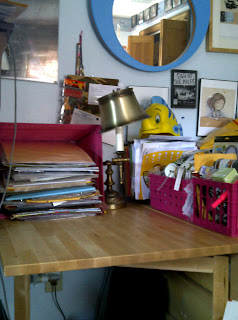 For whatever reason she decided that the pink bin above would be great for storing paper! When I first got home it was right side up and I knew that there was NO way that I could reach the paper from sitting when I needed it and getting up and down to pick out paper didn’t seem like a fun time to me at all. So she turned it on it’s side, which of course would lead to all the paper potentially being warped or bent and this was just not going to work out. 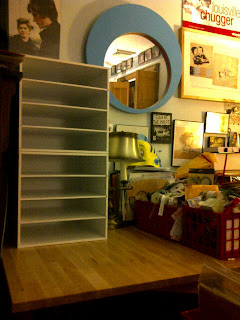 So we went to Michael’s and picked up some storage that was 50% off. I love building things.  Then I woke up and saw my mom built it without me.  Seriously this project was supposed to be exciting and freeing and instead it was just stressing me out and making me aggravated. 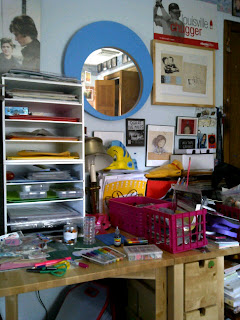 One night I went through the original bin and sorted everything into the organizer.  The top shelf is printed paper then we go in ROYGBIV order with the last bin being white, brown, black and other items in that ballpark.  The above photo was taken when I was sorting the pink bins to the right and getting all the embellishments together and all my ribbon together and all of that fun stuff.  It’s STILL not entirely organized but it’s a lot better than it has been. 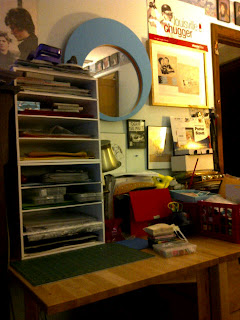 And then I got everything somewhat sorted and actually had an open space to scrap! Hooray!  Over the last few nights I managed to finish scrapping Hanson’s July shows.  I still have 14 more events to scrap and I am kind of hoping I can get at least half of them out of the way before a couple of weeks from now when concerts for me start picking up again.  But we’ll see!  I have to wait for the motivation to hit me which is usually at 1 or 2 am and then I end up too tired to finish what I’ve started!