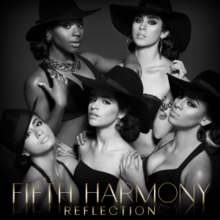 Reflection is the debut album from XFactor album Fifth Harmony.  It was released in early February with singles BO$$ and Sledgehammer having been released first.  I don’t remember having heard BO$$ but I do enjoy Sledgehammer.  Unfortunately, I can’t really say that for the rest of the album.  It’s an ok cd but I can’t see it being something that I listen to all of the time.  I felt like it also had too many current events and pop culture references in it (I keep getting the “Michelle Obama” part of BO$$ stuck in my head – but I can’t see that standing the test of time) and in a few years it will become old. I was disappointed in this release – I had high hopes for it!