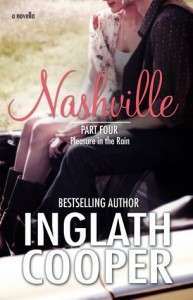 I had previously read parts 1 + 2 of the Nashville series back in 2013 and was so angry with how things were left that when I got the opportunity to read 3 and 4 I was super happy to finally find out what happened to CeCe and Holden.  Please note that this review WILL contain spoilers as some are somewhat necessary to review the full storyline.

When Part 3 begins, Holden has left Nashville to be with his girlfriend.  CeCe and Thomas have continued singing together as a group and Holden has been writing songs for them.  One of the songs that they sing, a big time singer Hart Holcomb wants to put on his new album as the title track.  Thomas says he will talk to Holden – but will Holden want to come back to Nashville?  Cece is trying to move on and is dating Beck – whose father is a big time country star.  Holden decides to come back and the three (+Beck) are asked by Beck’s father to be a foursome and open for him on his tour because his original opening act isn’t going to be working out.  At a M&G CeCe meets a guy who seem to be a little off and freaks her out – but Holden handles the situation – then the two end up kissing and Beck walks in on it.  Things get a bit rocky with all the relationships in the band and when CeCe is ready to tell Beck that she has feelings for Holden – the M&G guy that made CeCe uneasy shows up again – this time at a different concert on the tour. He ends up opening fire on everyone who is backstage.

Book 4 begins with the aftermath of the shooting. 3 of the 4 band members are recovering and one has been killed.  They are forced by the label to do media about the event because media was in their contract for the tour – even though the tour has not continued.  They’re also forced to record an album based on the contract even though no one really feels up to that. CeCe has been avoiding Holden but they end up engaged once again once they realize that they truly are in love with each other and it was not CeCe’s fault what happened to Beck. 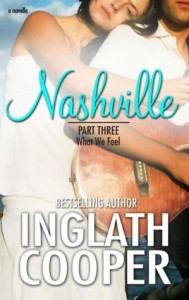 There are 4 more books in this series and I am looking forward to reading the rest!

I received a free copy of this book in order to write this review and participate in the book tour.

What We Feel (Nashville #3)

Hunky musicians Holden Ashford and Thomas Franklin rescue Nashville bound CeCe MacKenzie and her Walker Hound Hank Junior from the side of the road when her car catches on fire. A less determined girl might have let her dreams go up in smoke as well, but not CeCe. She’s been singing all her life, and she just wants a chance to do the thing she loves in a place where music is part of the fabric of life. As it turns out, Holden and Thomas want the same thing, and it isn’t long before they’re all chasing after the dream together.

Falling in love hasn’t figured in to CeCe’s plans, but the moment she sets eyes on Holden, her heart is asking why not? Holden is drawn to her as well, but he already has someone in his life, Sarah who still lives in Atlanta, Sarah who loves him. Who he thought he loved back until CeCe makes him realize he hadn’t really known that love could turn him inside out.

But an unexpected visit from Sarah brings to light a terrible truth and Holden is faced with a choice between doing the right thing or permanently defining himself as a guy he never thought he would be.

It is only in letting each other go that both Holden and CeCe will come to understand that in life and love, the part that’s real is what we feel.

With each of them gravely injured, one will not survive, forever changing the lives of everyone involved. Will one man’s hatred and contempt demolish all of their dreams, or will they eventually reach a place where they can even take pleasure in the rain?