April 1, 2015 by ConcertKatie No Comments 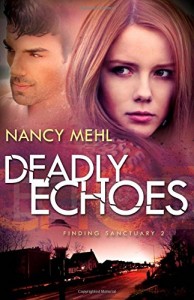 Deadly Echoes is about a woman named Sarah.  It is the second book in a series, but it works as a stand alone as well. When she was 6, her mother and father were both murdered while she and her 12 year old sister hid in a closet. The two girls ended up separated through CPS after that, but she had just reunited with her sister Hannah about a year ago when she finds out that her sister has been killed as well. The police think that it was a burglary gone wrong and find a drug addict guilty of the crime.  But Sarah is not so sure.

She enlists her police friend Paul’s assistance in trying to get to the bottom of what is going on. She thinks that her sister was close to figuring out who had murdered her parents – a case that has gone unsolved for 20 years – and that is why she was murdered because there were too many similarities between the two crime scenes and Sarah doesn’t think that the police are taking her concern seriously.

The rest of the book shows how Sarah is coping now being caretaker to her niece and trying to go through the things of her sister’s she was able to grab before her sister’s house was set on fire. (Coincidence?)

Will Sarah and Paul figure out what Hannah had figured out – before it is too late? Are their lives at risk by investigating these murders? You’ll want to find out by reading the book.

I really enjoyed this book – there were a few things that I picked up on throughout that I was kind of hoping that Sarah would as well to help keep her safe – but she didn’t.  Although I guess those led to other things in the story happening that might not have if she did what I wanted! This book was quite a thriller and I didn’t want to put it down.

After a youth filled with tragedy and upheaval, Sarah Miller’s life is finally settled with all echoes of the past silent at last. She happily calls Sanctuary her home and spends her days teaching at the local school.

Sarah’s joy at her recent reunion with her sister, Hannah, and meeting the niece she didn’t know she had is too soon interrupted when Deputy Sheriff Paul Gleason informs Sarah her sister has been killed.

As she learns more about Hannah’s death, the circumstances are eerily similar to their parents’ murder. Sarah enlists Paul’s help in digging deeper into the murders the police are dismissing as burglaries gone wrong. Paul’s concern encourages Sarah’s growing feelings for him, but as their investigation peels back the layers of lies almost twenty years old, they get close to uncovering the truth one person will do anything to hide–even if that means coming after the last remaining members of the Miller family.