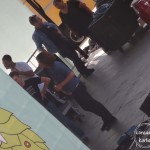 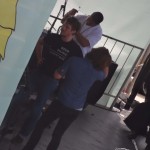 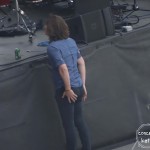 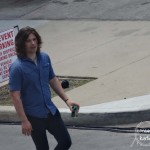 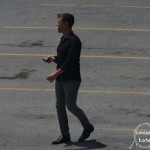 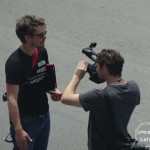 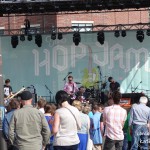 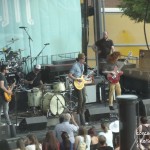 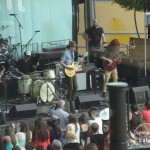 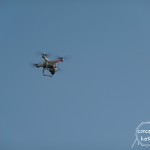 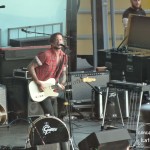 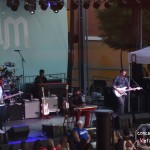 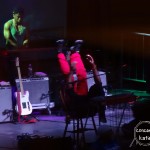 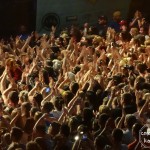 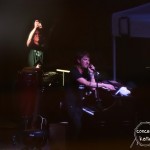 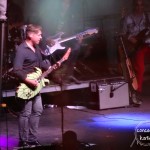 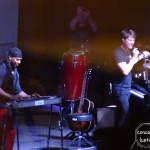 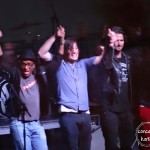 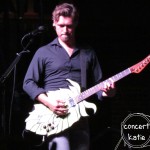 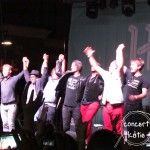 Saturday we woke up and decided we would check out Center of the Universe which is just a cool spot in Tulsa, you stand on a circle on an overpass and talk and you hear it echo but no one else does. It’s just a fun trick.  Then we went to the Hanson gallery to see some paintings Zac did (that unfortunately were all sold out before we even got to Tulsa) and some photos Taylor had taken.  There was a group photo for sale that we did like – but it was $60 and we just couldn’t justify it. There were several paintings I would have wanted had they still been available though. Oh well! (Moral of the story is, get to Tulsa the day before the check in starts so you can be first in line for everything)

We went to Mexicali’s for lunch and then headed back down to Cain’s for Taylor’s lecture that was bumped from the day before.  He “taught” us a bit about photography and then brought fans on stage to take their photos and then he took a picture with them.  He kept saying things needed to get sped up but then kept having more and more people come on stage for photos.  The only catch was they had to wear headphones because the photos are going into an “Are You Listening” Gallery which will be added to the website.  He had things rigged so the photo went to his laptop and then to a projector (he bought a nice projector, you can check out BuyDLP.com for more info if you are planning to buy one too) so we could see the photos as they were taken.

After Taylor’s lecture was done, all 3 brothers took to the stage to deliver the “State of the Band” where they talked a bit about what their plans were for the rest of the year.  They did get boo’ed when they said it wouldn’t include a tour!  A new fanclub website is coming next month and they are working with other artists.  I’m still hoping a couple of one -off shows turn up (preferably close by!) because I am now at 99 shows so the next show is going to be #100!

Then it was time to head back outside from Cain’s and wait for the Members Only Event concert to begin! Despite things seeming to be a bit behind, the show did seem to start about when it was supposed to.  The set started out with 5 new songs from the Members Only EP – this is always a treat because for the most part the only way you are going to hear these songs is to go to the event in Tulsa.  Every now and then a couple of the songs do make it into other setlists but this is the only guarantee to hear them.  The rest of the set was a mixture of some other members only songs, some rarer songs they don’t play much and then some typical songs as well.  Overall I thought it was a really solid mixture of a setlist! The only bummer was Taylor and Isaac both did solos and Zac didn’t, but the rumor going around is that he was not feeling well.

After the show it was the after party!  This is the 3rd time we have seen Taylor do an afterparty.  The party in Hershey, PA sucked. The party in Jamaica was awesome.  So we weren’t sure where this one was going to fall on the spectrum.  Turns out, just about in the middle.  The songs weren’t as good as Jamaica but were better than PA.  It wasn’t as high energy and I could barely even look at him on the stage because the stage lights were flashing and making me tear up to look at them.  He played songs from Haim, Amy Winehouse, Michael Jackson, Stevie Wonder, Elton John, Peter Gabriel, Lorde – to name a few.  It was a mixture of older and newer songs.

Sunday we decided to sleep in a bit since it was a late night the night before.  When we woke up, the Hop Jam stage was set up right outside our hotel (though unfortunately our room was in the back of the hotel and not the front!) and we walked around to see what was going on and if we would spot any Hanson’s.  When I stopped to take a photo of the stage we got yelled at to get back inside.  And at that point – no one was even ON the stage so I’m not sure why I couldn’t stop to take a photo for a second! Sheesh.

We went back to our room but I heard soundcheck starting so we went to the lobby where we had a pretty clear view of Hanson (and of the guard who yelled at us – so we stuck our tongues out at him assuming the windows were tinted and they weren’t! haha oops) so we hung out there and watched them do a few songs and then walk down the street.

At 3pm the doors to the festival opened, we went and got in line for merch (and got everything we wanted and then some! yay!) and grabbed some food from the food trucks. Then we went in the hotel to eat and then decided to venture through the craft beer area. A lot of the stuff was already gone and they weren’t even really selling sample tickets anymore because too many people were coming back and saying things were sold out! I guess that was a good thing for those who were selling beer but not so much for anyone who wanted to try anything!

At 5pm the music started – with opening act winner Capitol Cars (woo hoo I voted for them!) but it was so hot out and no real shade, I ended up heading to the hotel after their set and never returning outside. There was no ADA section and we figured that in the hotel lobby was the safest place for me to enjoy my 99th Hanson show! Also performing at Hop Jam were Taddy Porter, Butch Walker (who I had been told was amazing and did not disappoint!), Robert Randolph and the Family band – and of course, Hanson.

After the show we walked around a bit (since I had been sitting in basically the same spot for hours and needed to stretch!) and ended up spotting all 3 Hanson’s briefly, but did not get a chance to chat with them.  Isaac was at a local bar that we did pass and considered going in to, but ultimately opted against it and went back to the hotel for snacks instead.