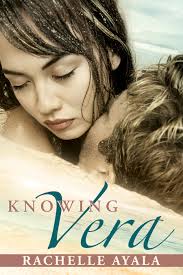 Knowing Vera is the 3rd book in the Chance for Love series (I had previously read and reviewed Hidden Under Her Heart and Broken Build).  This book follows some characters who we were introduced to in earlier books – Zach and Vera.  Zach and Vera are casually dating – but then Vera realizes that the woman that Vera believes that her father killed was Zach’s mother.  Zach lost his leg in an accident and is dealing with going from being an Olympic athlete to learning how to do things with his prosthetic leg.  But are they falling for each other?  It sure seems that way – but she doesn’t know what will happen when Zach realizes that it was her father who killed his mother.  Or was it?

That of course brings the murder mystery aspect into the picture.  Vera was with her father when he jumped from the bridge, but at only 7 years old she doesn’t remember what happened.  When she starts getting postcards, text messages and comments on her YouTube page that seem like they are coming from her father – she decides to investigate things.

Similar to the other books there is an on again off again with Vera and Zach.  She isn’t ready for a commitment, he is, or is he? and that adds some drama to the story as well. (Which some may argue is not needed.)  Vera also believes that Zach is a player and has a fiance so that of course is not helping matters with her trying to distance herself from him.

Vera ends up kidnapped and when Zach comes to her rescue it seems that he has been set up.  Vera is determined to find out who killed Zach’s mother if not her father to get him off the hook and get answers for Zach.  Will they figure it out in time and end up happily ever after?

Of the 3 books in this series, this one was probably my second favorite (behind Broken Build), the books are all very well written and are quick reads that you just get enveloped in and want to read until you can finish – or in my case – until your Nook battery dies!

Also worth nothing – this is a series but you don’t have to read them in order if you don’t want to.  HOWEVER – there are certainly some spoilers in this book in relation to things that happen in the other two books so if you think you might want to read them all – its probably best to start with Hidden Under Her Heart.  If you’re just looking for a one-off book then certainly consider Knowing Vera on its own.

Vera’s dating Zach, casually, not committed, when she discovers her long-departed father is the killer of Zach’s mother many years ago.Meanwhile, Zach reevaluates his life after losing his leg in a tragic accident and realizes he’s falling in love with Vera.Can their timing be so wrong? Vera knows the relationship is doomed, but she cannot resist the tugging of her heart and Zach’s panty-melting grin.Caught in a web of family secrets and hidden agendas, Vera and Zach must depend on each other for survival. A dangerous killer is on the loose, and Vera must find the truth, wherever it leads, even if it destroys her chance for love forever.Knowing Vera is a suspenseful, cross-cultural romance mixing an unsolved murder, adventure, and hot, steamy love scenes