Book Review: A Table by the Window

A Table By The Window is about Juliette who is a food writer at a local newspaper. Her entire family is in the restaurant business and she tried culinary school but couldn’t cut it.  When her brother says he is looking to open a new restaurant and asks for her help in getting it up and running.  She is hesitant because the last time they worked together she ended up dating the sous chef and when they broke up he left town. Soon after the restaurant had to close.  Except that she kept her relationship a secret so her brother has no idea.

Juliette seems to be getting all sorts of things piled on her plate (no pun intended?).  After telling a co-worker what to make for a party, her editor wants her to do a new column about planning menus for parties.  When that becomes a hit, she wants her to be on TV as well.  Juliette doesn’t want to be on TV but figures she will do it just this once.  Of course, once turns into twice.  Then of course she has the decision about her brother’s restaurant to make.  Should she help him out? It may mean needing to leave her job at the paper.  Her grandmother has just died as well and she is having trouble sleeping after her death.  And to top it off – even though she thought she deleted her online dating profile, she gets a message from a doctor in Memphis. (Juliette is in Portland!)

There really is so much going on in this book you can’t help to feel a bit overwhelmed – like Juliette – but she does a great job of dealing with everything – including her nosy French/Italian family.  Oh wait – I didn’t mention the family secret she may have discovered too!  When going through a cook book of her grandmother’s while gearing up to write a column at the paper about her, she finds a photo inside.  It’s not her grandfather, but the man looks an awful lot like her brother Nico.  Is he a relative? Who is he?

A Table By The Window is the first book in a series – which became painfully evident when I got near the end and not all of these loose ends with Juliette were tied up.  I felt like the book had a good ending – but I am dying to see what happens with the family secret and her maybe long-term relationship with Dr. Neil.

Included throughout the book are a bunch of recipes that go along with the food that is mentioned in the story.

Certainly a great read. Looking forward to reading “A Table for Two” to find out what happens!

I received this book for free from Blogging for Books for this review. I was not otherwise compensated. All opinions are my own.

The youngest heir to a French-Italian restaurant dynasty, food writer Juliette D’Alisa has spent her life negotiating her skill with words and her restaurant aspirations. When her brother Nico offers her a chance to open a restaurant together, she feels torn—does she really have what it takes? Should she risk leaving her journalism career?

After the death of her grandmother, Juliette discovers an antique photograph of a man who looks strikingly like her brother. As the truth behind the picture reveals romance and dark secrets, Juliette struggles to keep the mystery away from her nosy family until she can uncover the whole story.

Inspired by her grandmother’s evolving story, Juliette resolves to explore the world of online dating. To her surprise, she finds a kindred spirit in Neil McLaren, a handsome immunologist based in Memphis, Tennessee. With a long-distance relationship simmering, Juliette faces life-shifting decisions. How can she possibly choose between a promising culinary life and Neil, a man a world away in more ways than one? And is it possible her Grandmother’s story can help show the way? – See more at: http://waterbrookmultnomah.com/catalog.php?isbn=9780307731753#sthash.wOYd4nCv.dpuf 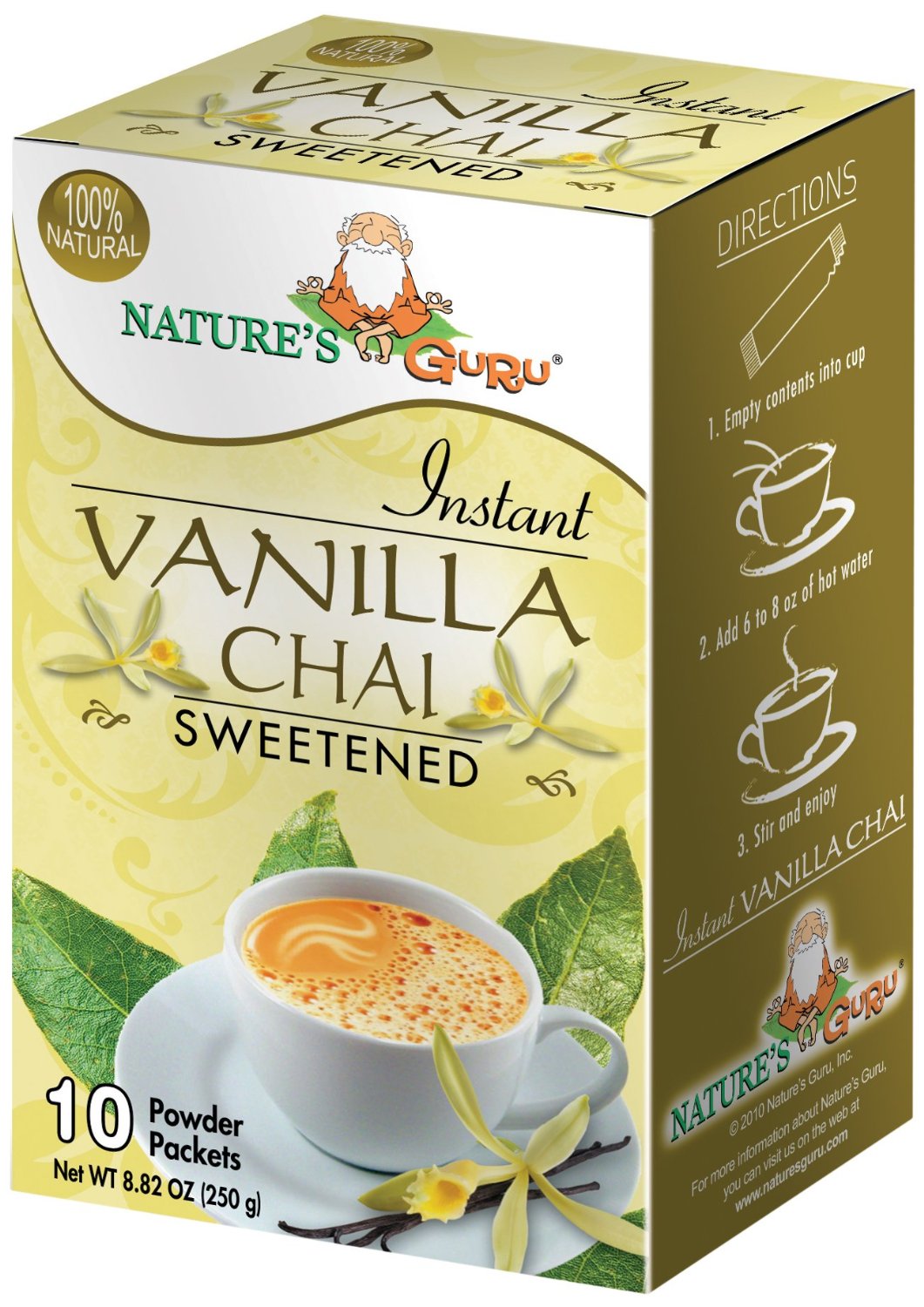 If your house is anything like my house – then you are all about the Chai Tea.  Recently I got the change to try out some Vanilla Chai Tea from Nature’s Guru and I have to say – I am hooked! It tastes great and is super easy to make – and best of all – natural.  Each box contains 10 powder packets that you pour into a cup and add hot water to it.  Stir & enjoy! It’s really so good and I’ve been getting over a sore throat so I’ve been happy to be able to have an “excuse” to drink lots and lots of it! (Not that you really need an excuse!)

Nature’s Guru instant vanilla chai produces a warm, invigorating feeling that has an energizing effect on your mind and body. We blend fresh black tea leaf and perfectly harmonize it with a robust bouquet of vanilla. Balanced with just the right sweetness, our instant chai delivers a robust experience that satisfies even the most discerning tea connoisseur. Nature’s guru instant vanilla chai is more than just a tea-it’s an indulgent sensory experience. By simply adding warm water to nature’s guru’s ready-to-mix special formulation, you unlock a rich nutty aroma and experience the best of vanilla chai in a quick, convenient way. Enjoy our specially formulated natural rich gourmet tea blend anywhere – at home, office, or while traveling on the go. 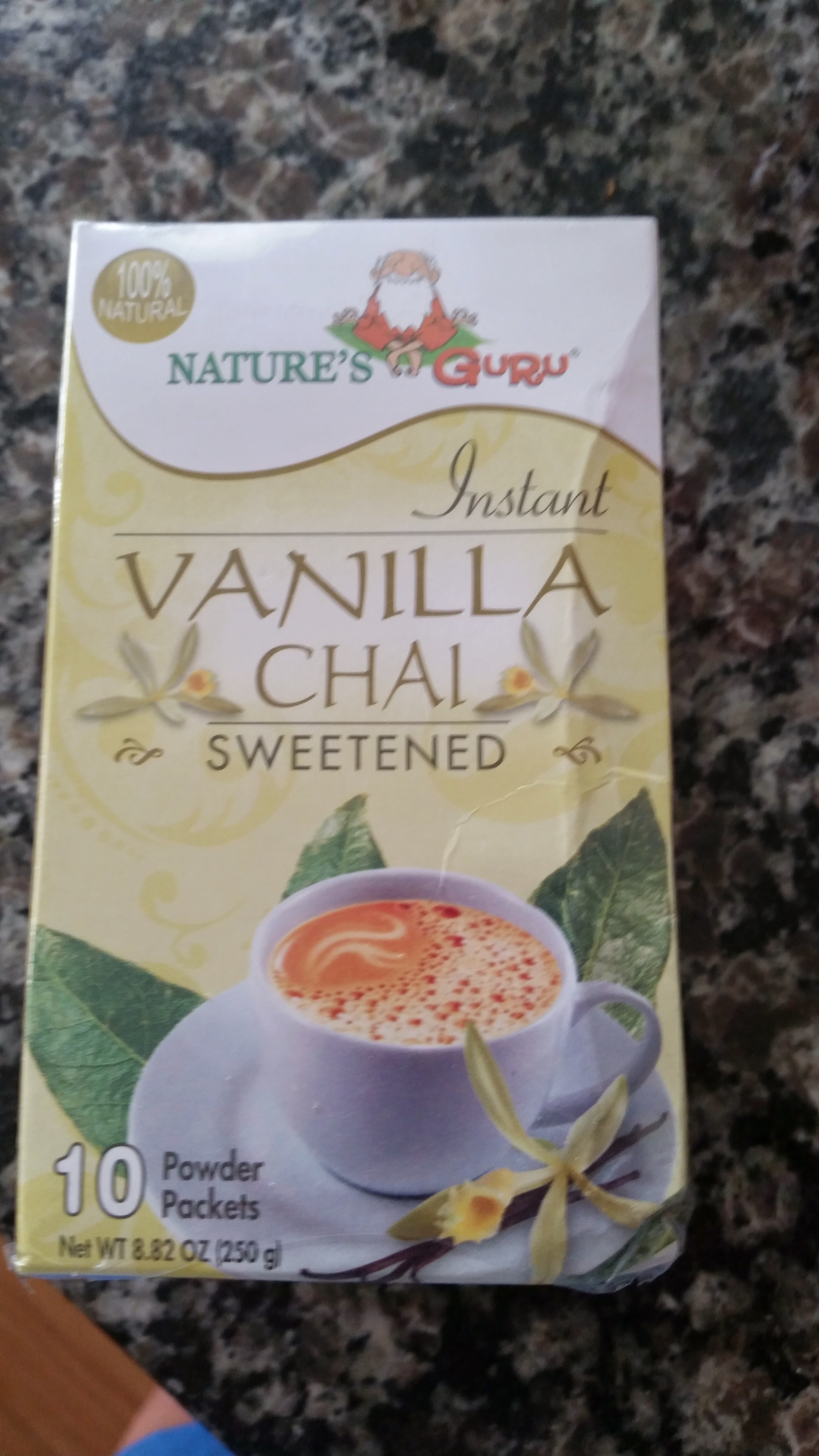 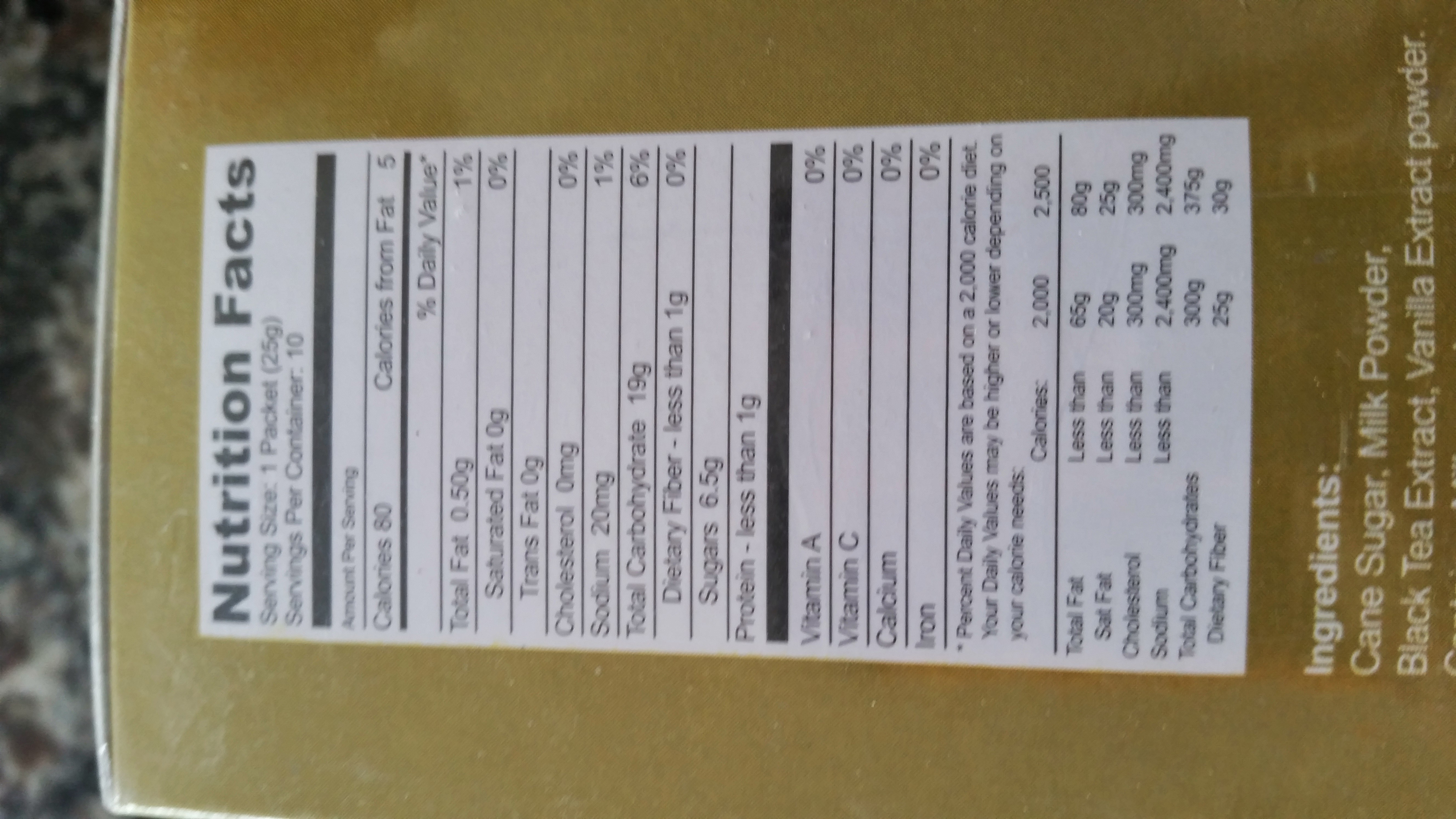 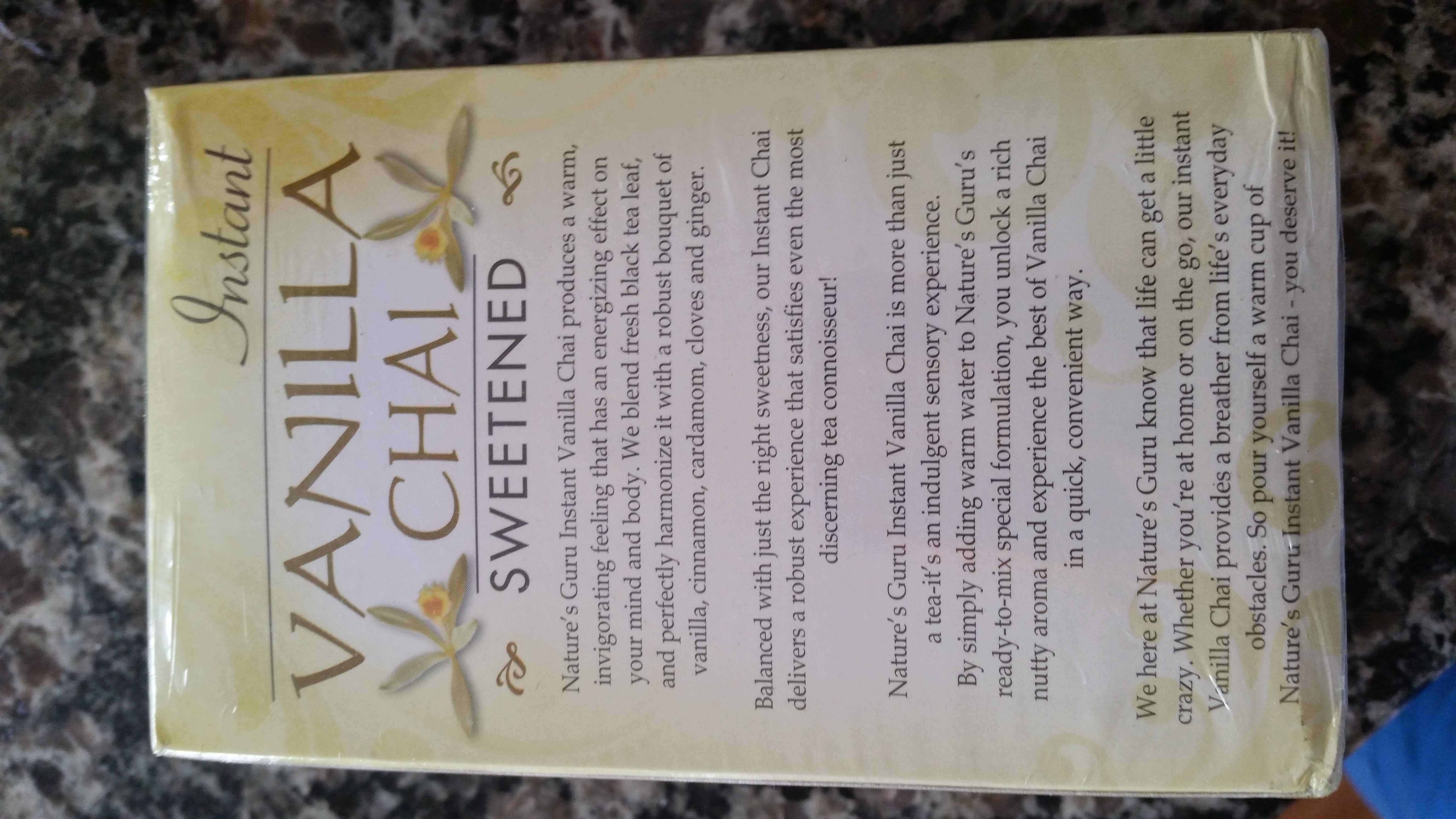 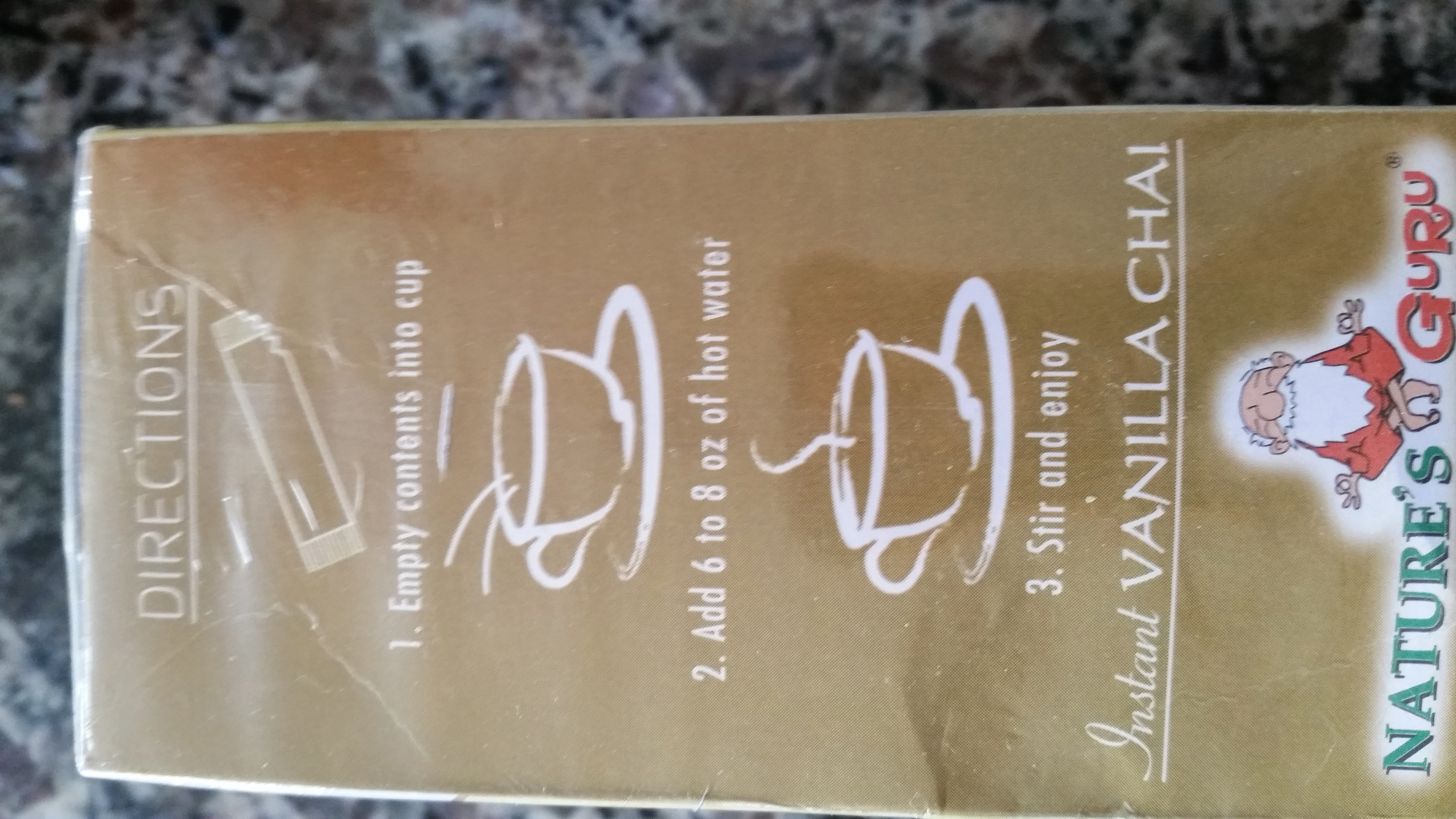 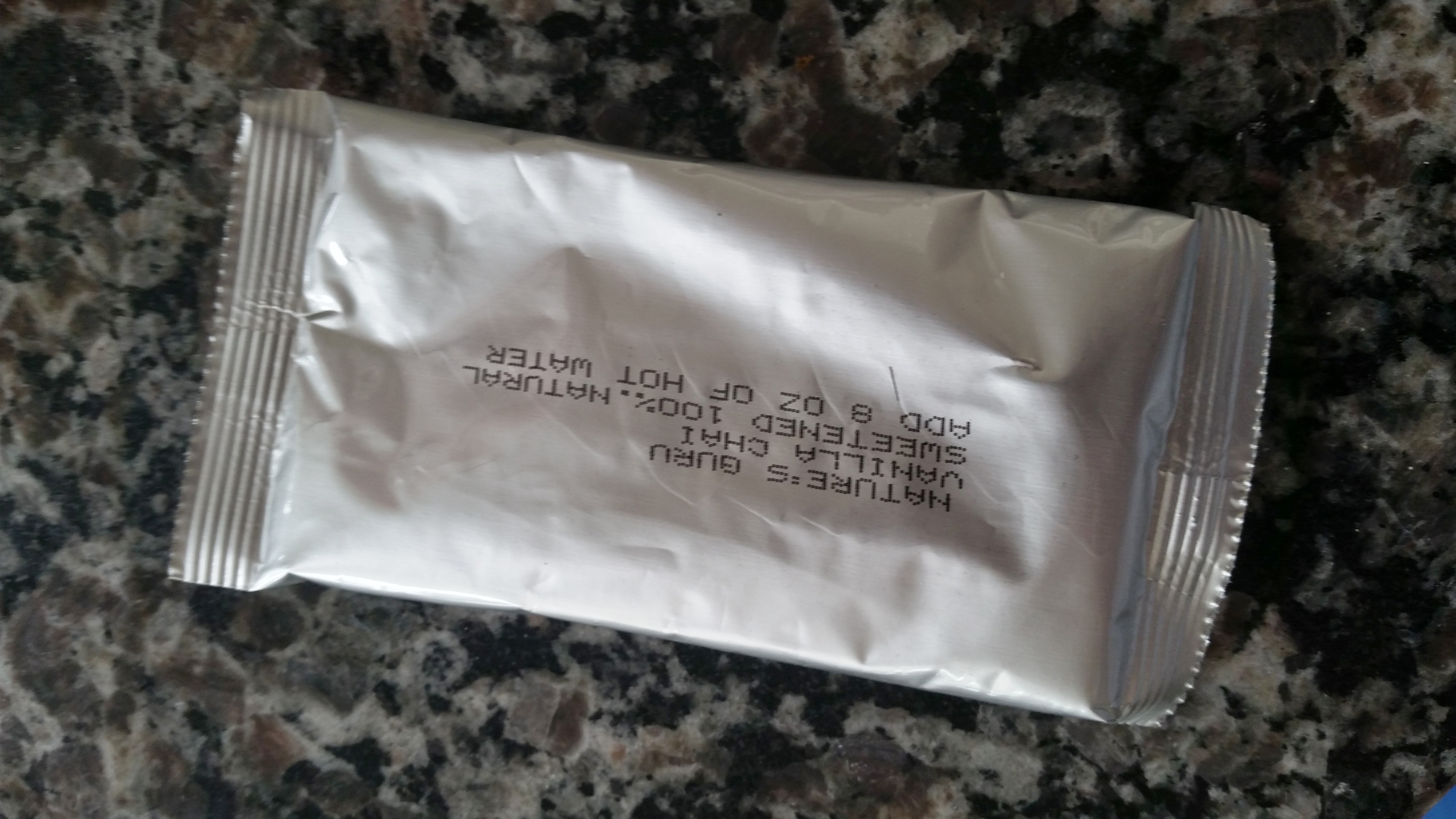 You can get Nature’s Guru Vanilla Chai on Amazon for $5.99 for a box with 10 powder packets – OR you can enter our contest and get a box for free!  (Additionally, the product can also be found at Rainbow Grocery, Whole Foods, Mom’s Organic Market, Home Good, TJ Maxx, Roots Market, New Leaf Community Market, David’s Natural Market to name a few)