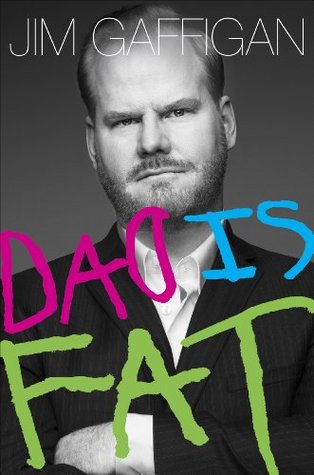 Dad is Fat is the latest book from comedian Jim Gaffigan. I am incredibly “picky” about what comedians I enjoy and find funny (most aren’t) but Jim is definitely one of my favorites. (And I even got to see him in person when I went to a taping of The View a few years ago!)

Jim has 5 kids – one of which gave him the title for the book.  The book is Jim’s take on parenting the 5 kids – who all live in a 2 bedroom apartment in New York City. (And occasionally join him on tour as well.) You don’t have to have kids to find the book funny, although it may end up being funnier if you do have kids and can relate to some of the situations that he has been put in by his kids. A parenting book without really being a parenting book and a humorous book as well. Some of the bits in the book I have heard him talk about in TV interviews lately promoting the book but I wouldn’t say that it was so much I felt I already knew what the book was about.

I was provided a free copy of this book to review from Blogging For Books. I was not otherwise compensated.

In Dad is Fat, stand-up comedian Jim Gaffigan, who’s best known for his legendary riffs on Hot Pockets, bacon, manatees, and McDonald’s, expresses all the joys and horrors of life with five young children—everything from cousins (“celebrities for little kids”) to toddlers’ communication skills (“they always sound like they have traveled by horseback for hours to deliver important news”), to the eating habits of four year olds (“there is no difference between a four year old eating a taco and throwing a taco on the floor”). Reminiscent of Bill Cosby’sFatherhood, Dad is Fat is sharply observed, explosively funny, and a cry for help from a man who has realized he and his wife are outnumbered in their own home 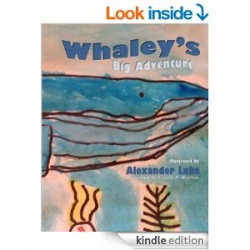 Whaley’s Big Av denture is written and illustrated by 5 year old Alexander Luke. It is a super cute story about a whale and the friends he meets in the ocean on his adventure.  The illustrations are just wonderful as well.  This is very easy to read for a child and I am sure that anyone will enjoy it, especially if you like the ocean and whales! The book is educational and fun!

I received one or more of the products mentioned above for free using Tomoson.com. Regardless, I only recommend products or services I use personally and believe will be good for my readers.
About the Book

Join Whaley on his big adventure in the ocean as he meets Whales of all different sizes. Written by 5 year old Alexander Luke and presented by his grandmother, award-winning children’s author Carole P. Roman, this oceanic adventure of whale sized proportions will teach youngsters about the different whales that live in the oceans.

Book Review: If You Were Me and Lived In… Australia 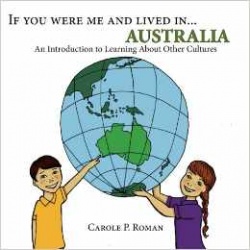 If You Were Me And Lived In… Australia is an introduction to learning about other cultures by Carole P. Roman. The book is short and sweet but I think that it takes care of all the questions children would have about another country – where is it? what’s it like? what would we eat? Would we go to school? What kind of games would we play?  I also liked that there were pronunciations throughout the book for the name of the country, cities and other items that may be confusing to pronounce to children (or adults too!).  There are a lot of great illustrations throughout the book as well and I think it really gave a great idea about the country.  This would be a great starting point and if your child was interested in the country, maybe they could research things a bit more on their own – or with some help.

The latest in Carole P. Roman’s delightful, globetrotting series, this colorful immersion Down Under opens a child’s world up to the many strange and wonderful things that take place in other countries. Written in simple, playful language especially for young readers, this latest addition to the series is certain to inspire curiosity and launch children on a lifelong love of exploring other locales.

Informative, fun, and always interesting, the book also covers history, national celebrations, and food, coming together in the vivid patchwork of a special place waiting to be explored by an eager young mind. It’s certain to prompt further conversation on this remarkable country, and to capture a child’s imagination about the rich and varied world beyond.

Former teacher Carole P. Roman is an accomplished author of the critically acclaimed Captain No Beard series that deals with such issues as dyslexia, compromise, sharing and leadership. The first book of the series, Captain No Beard – An Imaginary Tale of a Pirate’s Life was named to both Kirkus Reviews’ Best of 2012, as well as the Pinnacle Award – Best Children’s Book 2013. Her second series is a fun and educational approach to Yoga.Finally, Roman’s new series explores the small world we live in as well as the different, complex cultures of the people around us. The first book in this series, If You Were Me And Lived In… Mexico, received the Pinnacle Award for Best in Non Fiction in 2012.