Sunday night Kiss 95.7 had their Summer Kick Off Concert at Mohegan Sun Arena.  This event is usually completely GA and held at Six Flags – so I was happy that they changed things up a bit although I am willing to bet that they aren’t too happy.  My friend Jess ended up winning tickets from KC101 and asked me to attend with her. Considering I have a not so secret crush on one of the performers, I of course agreed.  The tickets she won were in the upper level, section 116.  They weren’t great, but they were free.  When we got inside we noticed that there were barricades in front of all the upper sections that said “CLOSED”.  We asked one of the ushers and he said they would give us reassigned tickets to a lower level section because they decided to close off the whole top.  We ended up getting the back row of the whole entire place. (We’d have been a little bit closer on the side if we stayed up top but I think the guy purposely gave us last row because he saw my cane and figured then I’d not have to do any stairs)

Originally, Cher Lloyd was in the lineup and I had really wanted to see her (again) but she canceled apparently because she went to film a video for Really Don’t Care with Demi Lovato. (And Demi loses points with me again!) Cher was replaced with MKTO who actually were a lot of fun so I guess I can’t be too upset, but still.

Hoe Chelle Rae took the stage first and played for half an hour.  They called some girls up on stage from the crowd to sing with them for one of the songs.  I did start out keeping a setlist but then got bored with it about halfway through – so I did keep track of Hot Chelle Rae’s set and it’s below!

Then it was time for Cash Cash who I had no idea who he/they was. He was a DJ and had a girl come out to sing a song. Next please! (I just don’t understand why they replaced on DJ playing in between sets with another DJ?

MKTO was up next and they had the whole place shaking. (Or maybe it was just their bass)  Malcolm took his shirt off at the end so of course the girls went crazy there.  Up until that point, they were the best of the night.

We had thought that b.o.b would be up next but to our surprise, R5 took the stage.  Ross asked for “2 seconds so he could tie his shoe” and then they mentioned that their set time kept getting extended.  I figured that meant something was up and either b.o.b was not coming (which would have been fine with me) or he was running late.  So R5 added at least 2 or 3 songs to their set. They were really good and I hadn’t really heard much of their stuff other than Forget About You, so I was surprised that they are more rock. I guess I was expecting something different with Ross being on the cheesy Disney show.

Then DJ Skillz continued playing, but it became kind of obvious that he was trying really, really hard to stall.  I don’t think that the younger girls minded or even realized it – but when 10 came and went, I knew something was up.  But if they swapped Austin and b.o.b’s set times, I think 99% of the place would have left.  Finally b.o.b took the stage and did like 15 minutes and that was that. He had also mentioned that he had “just landed and went 120 mph to get here” so I don’t know where he was beforehand but something had definitely been up!  His advice at the end of the show, which I found to be ridiculously inappropriate considering all the young people (girls) in the audience was “Don’t drink and drive, smoke and fly!” Um well, the first part of that was pretty good! So still… could have gone without seeing him. (Although he did run up into one of the sections and was “in” the crowd a lot which was brave. Or maybe he knew he wouldn’t get attacked too bad because he wasn’t Austin Mahone)

There was barely any time between b.o.b leaving the stage and Austin taking it.  I didn’t keep track of his setlist but from looking at other sets – I am pretty sure he did Banga Banga, Say You’re Just a Friend, Shadow, a cover of John Legend’s All Of Me, MMM Yeah, What About Love and that may have been all of it or close to it.  The girls went crazy for him. I had seen him before and still wasn’t really impressed. He’s basically the new Justin Bieber (even though he hates behind compared to him – but I thought he had read he started doing Justin covers so I mean… what can you expect?)

The show was over at just about 11. We made our way out (the wall of parents wasn’t too bad, but still – don’t stand right outside the doors. Pick a store front or something to meet your kid outside of!) and as we were getting back on to the highway a tour bus decided that they needed to get in the lane I was in so obviously I let them go.  We thought it may have been R5 because it had a hitch (we weren’t sure Austin would need one since he didn’t have any band set up) and then when I passed it (because it was going slow and because we wanted to know who was in it) Jessa thought she saw the blond girl from R5 up front.  All I saw was a guy with a beard and he was not one of the band members.  Then we lost them because they were going pretty slow.  I thought they might catch back up to me when I got off the highway to drop Jessa off at her car, but no such luck.  Oh well! 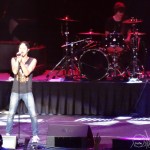 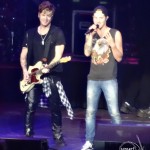 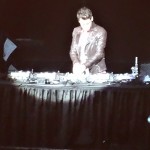 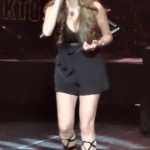 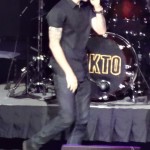 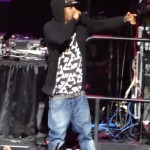 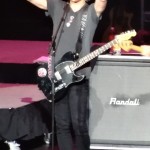 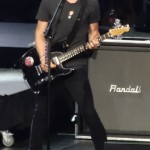 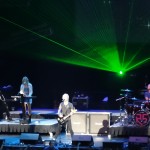 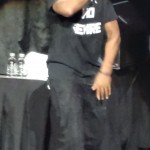 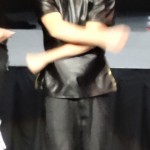 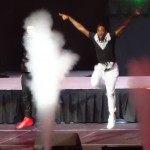 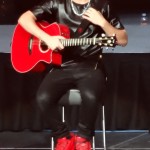 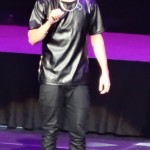 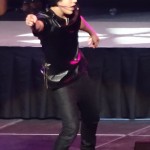