Throwback Thursday – Bash At the Base 2000 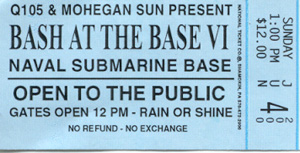 We got to this show pretty early and were right up front on the rail.  It was the beginning of summer and I put on no sunscreen and ended up getting the worst sunburn of my life. No joke. I burned so bad that I ended up having blisters all over my chest and it was the most uncomfortable situation to be in, ever. (Though did I learn my lesson to always put on sunscreen? Nope.)  I enjoyed both BBMak and Westlife’s sets (they were boybands, how could I not?) but it was this show where I grew to hate Train. By the time they took the stage I was so miserable that I wanted nothing more than for Hanson to come on and Train’s set seemed to be going on FOR-EV-ER.  They finally got off the stage and Hanson came out and did their 4 songs.  Because of my burn, we left right after even though there were 1 or 2 more acts left to go.

BBMak released a second album in 2002 and broke up in 2003. All 3 band members have gone their separate ways either joining new bands or trying it as a solo artist.

Train is still going strong and still has singles on Top 40 radio. I’ve seen them several more times and have been miserable the whole time every time.