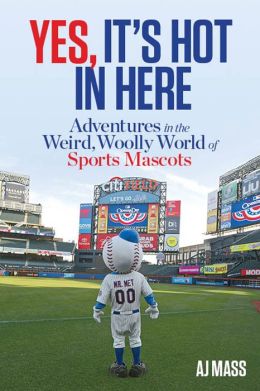 I will give you 3 guesses as to why I chose this book to review – and the first 2 don’t count.  Yes, it is because Mr. Met is on the cover. Now, I try not to judge a book by its cover but I figured you could’t go wrong with a book of Adventures in the Weird, Woolly World of Sports Mascots!

The book is actually written by a former Mr Met, AJ Mass.  Therefore, a majority of his personal stories revolve around the Mets organization.  He also tried his hand at being the mascot for a few other places as well and he interviews several other mascots as well.  While the mascots may be well known, oftentimes who is inside them is not that known at all (and many times this is done on purpose.)

One chapter is about how the Pirates mascot seems to be cursed, which was interesting.  Many who had wore the costume got in trouble for one thing or another – whether it be while working for the Pirates or after.

I was happy that there is even a chapter on females working as mascots – there are plenty of reasons why it could be easier for men to be mascots but I liked reading about girls who tried out or even changed the rules at schools as far as who could try out to be a mascot.

I think even if I was not a Mets fan and a fan of Mr. Met, I still would have found this book every bit just as interesting as I did.  It certainly is a job that looks easy – but when you read more about it you find out that it is not at all.  I certainly have a new found respect for all of the mascots (which I had a ball taking photos of at the All Star Game this summer!)

Yes, It’s Hot in Here explores the entertaining history of the mascot from its jester roots in Renaissance society to the slapstick pantomime of the Clown Prince of Baseball, Max Patkin, all the way up to the mascots of the slam-dunk, rock-and-roll, Jumbotron culture of today. Along the way, author AJ Mass of ESPN.com (a former Mr. Met himself) talks to the pioneers among modern-day mascots like Dave Raymond (Phillie Phanatic), Dan Meers (K. C. Wolf), and Glenn Street (Harvey the Hound) and finds out what it is about being a mascot that simply won’t leave the performer.

Mass examines what motivates high school and college students to compete for the chance to wear a sweaty animal suit and possibly face the ridicule of their peers in the process, as well as women who have proudly served as mascots for teams in both the pro and amateur ranks. In the book’s final chapter, Mass climbs inside a mascot costume one more time to describe what it feels like and, perhaps, rediscover a bit of magic.