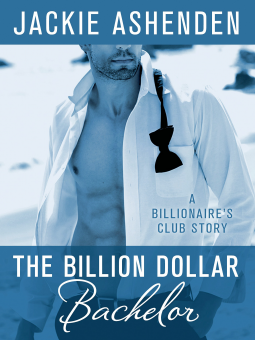 The Billion Dollar Bachelor is about Pandora, daughter to a powerful man that keeps her protected and isolated at all times.  Except one night she manages to escape out of the limo while no one is looking. She turns off her cell phone in hopes that no one can track her and heads to a bar.  Trying to keep anonymous, she meets a good looking guy and the two hit it off.  Neither of them tell each other who they are, they just called each other “Snow White” and “The Huntsman”.  He is Jax Marrow, rich entrepreneur whose family has previously had some issues with Pandora’s family.  They end up going back to “Hunts” place, Pandora loses her virginity to him and then he gets mad at her that it wasn’t “special”.  Pandora doesn’t care, she just wanted it to happen and is happy to be free, at least for one night.

The next morning, her Dad and his security team are there to bring her back home – it is her birthday and he is going to get her a fiance for her birthday! Except that Pandora wants nothing to do with the guy her Dad wants to pair her up with.  She doesn’t want to be used as part of a business deal.  So her father proposes another deal – that she marry Jax instead.  If not, he will disclose all of Jax’s family secrets.  Jax agrees and the two make an announcement of their engagement and act like they’d been dating in secret for a while.  Pandora likes this set up as she is falling for Jax – but Jax keeps pushing her away because he is afraid to lose control.  When Jax finally comes around and decides that he wants Pandora to be all his – Pandora panics and runs off.

What will end up happening? Will the expensive engagement party go to waste? Will they realize they both love each other?  Find out by reading The Billion Dollar Bachelor.

I have to say, I enjoyed most of this book.  However, Jax kind of made me crazy in his whole “not wanting to lose control”.  The book was short, so he didn’t really elaborate all that much on WHY that is – and I kind of wish that he did.  We know it stems from an incident with his mother and half-brother but I really wanted to know more of his back story and what was going on there. And then near the end Pandora was kind of making me nuts as well.  Neither of them could say what they wanted or knew what they wanted.  I guess if not, the story would have been pretty blah and predictable though.

I am looking forward to reading The Billion Dollar Bad Boy which is about Jax’s brother Donovan – coming out soon!

The Billionaire’s Club: a fabulously sexy contemporary series about some of the world’s wealthiest, most powerful men and the women they claim…and keep.

Jax Morrow is a dangerously handsome, spectacularly wealthy entrepreneur whose world is turned upside down when Pandora Garret walks into a dark, smoky bar one night—a stunning combination of sex and innocence. He knows she’s trouble at first sight, but Jax can’t let her leave…unless she’s leaving with him.

Pandora has had enough. Kept under lock and key by her powerful, controlling father, she aches for freedom. When she briefly escapes and meets Jax she knows he is just what she has been looking for: forbidden, unforgettable passion. After one night in Jax’s arms, Pandora knows she can never go back to living under one man’s domination. Determined to control her own life she tries to resist Jax, but a dangerous desire rises between them—one that threatens to destroy them. But both Pandora and Jax discover that they just can’t be pulled away… Don’t miss Donovan’s story in The Billion Dollar Bad Boy coming in March 2014 and Sean’s story in The Billionaire Biker coming in April 2014