April 8, 2014 by ConcertKatie No Comments 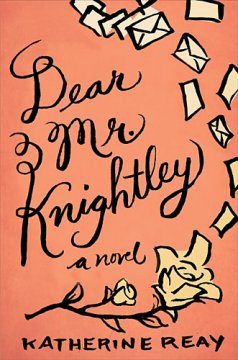 As the title of the book suggests, Dear Mr Knightley is a series of letters from Samantha Moore to Mr Knightley.  Sam is an orphan and in her mid 20s. She receives an offer from Mr. Knightley and his foundation to put her through school at Northwestern University’s Journalism school.  There is just one catch: She must write letters to Mr Knightley letting him know of her progress in the program.  The letters evolve into more of a diary of sorts than just an update of how her school work is going, which gives the readers and inside look to her personal life.

Sam is never sure if Mr Knightley is his real name or if he in fact took on a persona. Mr Knighley does not respond to her letters (although he does once, early on, because she asked him a question he thought deserved an answer) but occasionally she does hear from Laura who works at the foundation.   I found her trials and tribulations throughout her course work to make sense – one letter she thinks she is a failure and is ready to turn in the towel – then she does well on her next paper and is on the right track again.  Something similar through my college career – it’s somewhat of a roller coaster ride.

Sam is also a huge fan of the classics – and often uses references from Jane Austin, the Bronte sisters and Little Women in her letters.  I think if you are as into these books as Sam, you will pick up on more than I did – while I am aware of some of the characters and storylines I have not read quite a few of the referenced books so I fear some may have gone over my head. (Although I wouldn’t say not having read the books made it more difficult to read this one – just that perhaps I missed out on a few ‘inside jokes’)

We do find out who Mr Knightley is at the end – but if you want to know you’ll have to read the book for yourself. I’m not telling!

Samantha Moore has always hidden behind the words of others—namely, her favorite characters in literature. Now, she will learn to write her own story—by giving that story to a complete stranger.

Sam is, to say the least, bookish. An English major of the highest order, her diet has always been Austen, Dickens, and Shakespeare. The problem is, both her prose and conversation tend to be more Elizabeth Bennet than Samantha Moore.

But life for the twenty-three-year-old orphan is about to get stranger than fiction. An anonymous, Dickensian benefactor (calling himself Mr. Knightley) offers to put Sam through Northwestern University’s prestigious Medill School of Journalism. There is only one catch: Sam must write frequent letters to the mysterious donor, detailing her progress.

As Sam’s dark memory mingles with that of eligible novelist Alex Powell, her letters to Mr. Knightley become increasingly confessional. While Alex draws Sam into a world of warmth and literature that feels like it’s straight out of a book, old secrets are drawn to light. And as Sam learns to love and trust Alex and herself, she learns once again how quickly trust can be broken.

Reminding us all that our own true character is not meant to be hidden, Reay’s debut novel follows one young woman’s journey as she sheds her protective persona and embraces the person she was meant to become.