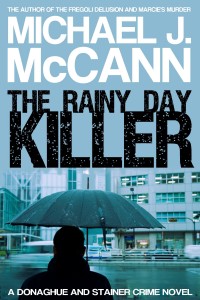 Lately I’ve been reading a lot of romance novels so I was quite happy to read a murder mystery for a bit of a change of pace.  There is a killer on the lose dubbed “The Rainy Day Killer” because he waits until it is raining to capture his victims – offering them the protection of his umbrella.  Then he rapes and strangles them, dumping their body a few days later.  The rain also helps wash away the evidence so it has been difficult for the police to catch him.  After 2 victims showed up and they seem to be getting closer to figuring out who he is, the killer threatens to capture Detective Karen Stainer as his next victim!

The Rainy Day Killer seems to be quite smart – he is always one step above the police and even sends them videos to taunt them after each of the kills.  But once he threatens Detective Stainer and it seems like he is going to try and capture her at her wedding – all bets are off.  Oh, and did I mention she’s marrying an FBI Agent?  There will certainly be enough men in uniform around to foil his plan should he try anything – but the killer is cocky and thinks that he can outsmart them all.

I know, but I won’t let you know the ending of the book! Be sure to check out The Rainy Day Killer if you want to find out!

I really liked this book.  It was easy to read, I liked the characters and it was a story that I could get involved in.  I was rooting for the good guys and hoping that the killer would mess up somewhere and leave some evidence that the police could work with and catch this guy!  If you’re into serial killers or murder mystery books I think that you will enjoy this book!

Michael J. McCann was born and raised in Peterborough, Ontario, Canada. He earned a B.A. (Hons.) in English from Trent University and an M.A. in English from Queen’s University. He has worked as an editor and a project and training consultant and manager with the federal government. He is an author of crime fiction and supernatural thrillers. His Donaghue and Stainer Crime Novel series includes Blood Passage, Marcie’s Murder, The Fregoli Delusion, and The Rainy Day Killer. He is also the author of the supernatural thriller The Ghost Man and is currently working on another supernatural novel.

A man in a business suit offers the protection of his umbrella to an unsuspecting woman, and several days later she turns up dead on a river bank, raped and strangled. The terrifying serial killer known in the press as the Rainy Day Killer is now hunting new victims in the city of Glendale … whenever it rains.Homicide Lieutenant Hank Donaghue leads the investigation as the killer begins to communicate directly to him through phone calls and grisly packages containing body parts of his victims. Assisted by FBI profiler Ed Griffin, Donaghue and Detective Karen Stainer pursue an elusive predator who leaves no physical evidence behind.The timing couldn’t be worse, however, as Karen Stainer’s attention is divided between the investigation and preparations for her upcoming wedding. Distracted and uncertain about her future, Stainer is furious when she learns that the Rainy Day Killer has followed her to Virginia, where the wedding will take place, and that he intends to make her his next victim!
Prices/Formats: $3.99 ebook, $19.99 paperback
Pages: 290
ISBN: 9780987708786
Publisher: Plaid Raccoon Press
Release: August 30, 2013

« Previous post
Book Review: We Are Our Brains
Next post »
How to Keep Track of Potential Scrapbook Items While On Vacation