January 10, 2014 by ConcertKatie No Comments 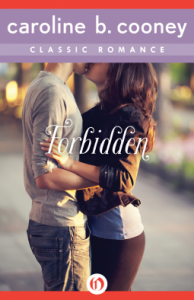 I have loved reading Caroline B Cooney books since I was young, so I never miss an opportunity when the books pop up on NetGalley.  This one however was a little bit harder to follow at first with all the characters, but eventually I got everything straightened out.

Annabel and Daniel meet at a party and fall in love – but Daniel doesn’t realize that she is the daughter of the man he believes killed his father.  This turns into a bit of a Romeo and Juliet situation because her father does not want her anywhere near this boy and once Daniel finds out her last name is Jayquith he is torn on if he wants anything to do with her or not anymore.

Meanwhile, Annabel’s BFF Emmie’s sister is getting married.  Daniel is in the wedding as is Annabel because he is friends with the groom.  This is when he realizes who she is and wants nothing to do with her.

Meanwhile, there is also Jade – who is Annabel’s cousin, but Annabel doesn’t know it.  Her aunt Theodora gave Jade up for adoption when she was born.  Jade’s adoptive parents both have died and she found the paper that she is Theodora’s.  She heads from Ohio to New York to Connecticut and the family’s driver ends up letting her into the home where she introduces herself to Annabel’s father.

And… are you still following? At the wedding there is a boy named Alex that Emmie falls for.  She wanted to figure out how old he is but when she looks at his ID she finds out that he is not who he says he is.  He snuck into the wedding to get closer to Daniel because he believes that the same man that killed Daniel’s father killed his brother.

Lots of other crazy stuff goes down and Alex reveals who he believes is the killer and Annabel gets kidnapped and they have to find her.

Will they find Annabel? Will Daniel believe Alex and that someone else was the killer and not Annabel’s father? Who really is the killer?

All this and more – revealed! in Caroline B Cooney’s Forbidden.

This was a rather easy read once I got all the characters sorted out in my head.  The book bounces around from who is with who and who is telling the story in each chapter and I think I’ve grown used to books with a chapter per character or just 1 character telling the story and I think that’s where the problems arose.  But write yourself a key if you have to, ain’t no shame in it! and power through because I think you will end up really enjoying it, as I did!

A secret that could destroy two legendary families threatens to change the course of true love in Caroline B. Cooney’s mesmerizing novel.

Annabel Jayquith and Daniel Ransom meet at a party. They fall instantly in love, unaware that their lives are inextricably bound together by the crime that shocked a nation.

Daniel is the high-profile son of a slain US senator who had presidential ambitions. Annabel is the daughter of a billionaire businessman. Like Daniel, Annabel is haunted by the discovery of her family history—a past she never knew existed.

Annabel is rich and beautiful, but eighteen-year-old Jade O’Keeffe is poor and alone. She hates her mother, the fabulously successful TV talk-show host Theodora Jayquith, for giving her up for adoption. But most of all, she hates Annabel, Theodora’s spoiled, much-loved niece. And Jade is going to make them all pay.

As Daniel’s search for the truth about his father’s unsolved murder puts him in the crosshairs of Jade’s revenge, a killer slips from the shadows. Now a secret that could bury two powerful families could also destroy Annabel and Daniel’s growing love.