Book Review: Not Quite The Classics 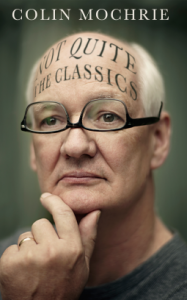 If you know who Colin Mochrie is, then you know that he is GREAT at improv.  If you don’t know who he is, head over to YouTube and check out Whose Line Is It Anyway?  And thank me later.

The intro to the book “Not Quite the Classics” Colin writes that he doesn’t like to do work, with improv he doesn’t have to, he just has to show up and then goes from there.  So when he somehow ended up with a book deal, he didn’t want to write a book because writing a book was WORK!  However, he enjoyed doing “first line, last line” where you’re told the first and last line and then you have to improv everything in the middle. So Colin decided to take classic literature and put a little bit of a first like, last line improv twist on it and that is how we end up with “Not Quite the Classics”

There are a dozen “classics” remixed in this book and I think that you’ll get a kick out of it, I know I did!  And some of the stories – where the classics were in rhyme – also rhyme. Gosh Colin, how are you so talented?

The stories certainly take quite a different twist from their originals – I mean, The Cat in the Hat turned into The Cat and My Dad – and it’s a story about – ZOMBIES!  Moby Dick is about an actor going on auditions, named Ishmael (of course).  The first line Colin added to his work on A Tale of Two Critters (based on a Tale of Two Cities) had me laughing out loud.  Another one I enjoyed was “Twas Not Right Before Christmas” which was quite comical, and of course, entirely rhyming just as the original does.

Where the art of improvisation meets the art of literature.
Based on the improv game First Line, Last Line, Colin Mochrie of Whose Line is it Anyway? fame, puts a unique spin on works of classic literature. Taking the first line and last line from classic books and poems, Colin recasts these familiar stories in his own trademark offbeat style:
– A verbose coyote becomes the star of A TALE OF TWO CRITTERS- Ishmael is a struggling actor hunting for a good hair day in MOBY
– A rainy day at home becomes a zombie-killing adventure in THE CAT AND MY DAD
– Mighty Casey strikes out again in CASEY AT THE BAR
These stories, and many more, prove that no literary masterpiece is too big, or too small, for the improvisational comedy treatment.