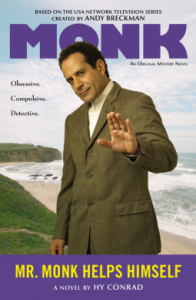 Mr. Monk Helps Himself is a book about Adrian Monk an OCD Detective. You may have seen the TV show that was on for quite some time called Monk. Same characters, new mystery.

Natalie is studying for her PI license and the two are trying to investigate all sorts of cases with the police department.  There are I think 3 cases that are going on all at the same time in the book that they are trying to figure out.  One is personal for Natalie – when she goes to a retreat with “Best Possible Me” the “cult leader” as Monk refers to her, Miranda, jumps off a cliff killing herself moments after chatting with Monk and Natalie.  Natalie is convinced that Miranda would not just kill herself and tries to get Monk to help her out with the case even though it is not official.

Meanwhile, there is another case involving a clown – which is one of Monk’s major phobias (he has a list of 100 phobias and when he discovers a new one he has to be cured of one and combine two together so the list is never more than 100.)  Monk doesn’t want to take the case but ends up doing it anyway, despite his phobia.

Will they solve all the cases? Is Natalie right and Miranda was murdered and didn’t commit suicide?

If you liked the show Monk, or like murder mysteries then this is definitely the book for you.

An all-new original mystery starring Adrian Monk, the brilliant investigator who always knows when something’s out of place….

Now that Monk and Natalie are both in San Francisco again, life is almost back to normal for the duo, with one exception: Natalie is studying for her PI license, the last step to becoming Monk’s full partner.

Before taking the plunge, Natalie sneaks off to Half Moon Bay for a retreat run by Miranda Bigley, charismatic leader of the Best Possible Me self-help program, whose philosophy has helped Natalie deal with her recent life changes. But her plans for a relaxing weekend away are disrupted when Monk tracks her down, determined to rescue her from the cult.” Their argument is cut short when Miranda, in full view of everyone, calmly walks to the edge of a cliff and jumps off.

Even though Miranda’s death looks like suicideespecially when it’s discovered that she was on the brink of financial disasterNatalie is sure it is murder. But Monk brushes her off to help the SFPD solve the murder of a clown, despite his coulrophobia, or fear of clownsnumber ninety-nine on his list of one hundred phobias.

As Natalie and Monk begin their separate investigations, they are quickly caught up in many precarious situations, but if they want to figure out whodunit, they will have to find a way to become true partners