February 14, 2013 by ConcertKatie No Comments 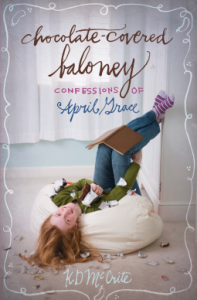 Once again I find myself in April Grace’s life.  Her new baby brother Eli is here and she is adjusting to her new life.  Her sister Myra Sue is acting very, very strange.  She keeps darting around their mailbox and goes nuts every time the telephone rings.  April is convinced that something is going on with her, but she can’t quite figure out what.  Myra Sue wants to be a famous actress – she wants to be on Days of Our Lives and she wants to be with Bo Brady. (I got a kick out of this because I have been watching Days of Our Lives since I was born – before I was born even!)

It is Grandma’s birthday and Mama and her friend Isabel decide that they are going to throw her a fancy birthday surprise.  They plan and plan but when the day comes, Grandma won’t go to her house so they can get things ready!  April Grace decides that Grandma MUST driver her to the store for notebook paper so she can finish her homework – and then proceeds to attempt to keep her Grandma out of the house for as long as possible.  When they get back, the party is underway but there is a mystery guess that arrives.

The guest is April’s other grandmother, Mimi, except that April didn’t even know she existed because she had abandoned her mother when she was just a baby.  April wants nothing to do with this horrible woman and cannot believe that her parents are letting her stay at their house!

But soon, April turns around and gets to know her other grandmother and realizes that maybe that change isn’t so bad.

Meanwhile, Myra Sue has run off and no one knows where or why.  Or do they?

I really enjoy this series, even though it is a young adult series (but I tend to like those books more than anything else).  Published by Thomas Nelson – there is definitely faith present in the books.  It also helps teach a lesson and has a moral which I think is important for young kids reading these books!

The last thing April Grace wants is more change in her life—but that’s exactly what she gets! Plus, April has a new mystery to solve when Myra Sue starts sneaking around and acting very suspicious!

From snooty new neighbors to starting junior high to getting a new baby brother to having her grandmother get a boyfriend, April Grace has had enough change to last until she is at least 87 years old.

But when it rains, it pours, and April Grace is in for the ride of her life when her prissy, citified neighbor Isabel becomes her gym teacher and a long-lost relative suddenly reappears and throws everything into a tizzy. On top of that, April’s sister, Myra Sue, has been hiding something and sneaking around. April needs to find out what is going on before her silly sister gets herself into trouble again. More important, will April find the grace she needs to handle her topsy-turvy life and forgive past wrongs?

Girls will fall in love with April’s humor and completely relate to her as she deals with family, friends, drama, and both the humor and the heartache that are part of growing up.