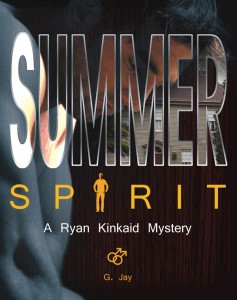 Summer Spirit is the first book in a series. Just a word of warning – the book starts out a bit sexual and graphic.  I know there are some people out there who may then decide that the whole book is written in this way and stop reading right then and there.  Trust me, it is not.  Once you get past the first page, it is a regular story and not as graphic.  If you decide to stop based on the first page / paragraphs, you will be missing out on what I thought was a great story!

It follows Ryan Kinkaid who is currently living in New York but is looking for something more in his life.  He decides to take a vacation to New Hampshire with his best friend Lauren just to get away from things for a while and to see what happens.

While there, he makes a few friends and ends up getting to be quite close with Ty, one of the locals.

Meanwhile, the home he is staying in seems to have a ghost living in it, that is also gay.  Ryan tries to find out who it is that is haunting the house and why he might be hanging around – what is the unfinished business and can he help him?

At first he doesn’t tell Lauren that he spotted the ghost – who he finds out is Nicholas, in his room – but once she spots the ghost as well he has to come clean.

I am looking forward to the next book – Autumn Reveal!

Ryan Kinkaid, a successful gay Manhattan antique dealer has had it with life in New York City, especially his random love life. Ryan has what most New Yorkers want — his own successful business, and a mortgage-free brownstone on West 71st Street. However, at age forty-one he discovers he is lacking one very important thing in his life: a meaningful and loving relationship. With summer just around the corner, the approaching heat and his restlessness are reasons for his escape from the city. A four-month rental in historic and picturesque Portsmouth, New Hampshire, with his best friend Lauren was the answer.

Renting a house built in 1810, kindred spirit Nicholas reaches out for contact, and Ryan finds himself wanting to know about the past. However, Nicholas is not the only one wanting Ryan’s attention. Ty, a handsome local man, also has strong desires for Ryan.

The stark contrast of the past collides with the present in this tale of lost and betrayed love, and irrational and undying prejudice.

In the end, all that is left is the affirmation of the value of honesty and commitment in love.

A communications graduate of the City Universities of New York, and after twenty-nine years as a human resources administrator, Jay decided to apply his understanding of the complexities and foibles of the human character in a more creative way.

Like the main character, Ryan Kinkaid, Jay is a gay man who believes in love and commitment. He and his husband have been together for over thirty years and live on the West coast of Florida with their two cats. A transplant from New York, Jay continues to travel regularly to Portsmouth, New Hampshire, to connect with the New England life which he so loves.