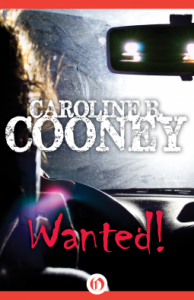 Wanted! Is by Caroline B Cooney – someone who I read a lot of when I was a kid.  This book is about Alice – she is home and gets a strange phone call from her Dad. He tells her to pick up a couple of files from his office and take his car and drive somewhere to meet him.  Except that Alice is only 15 and doesn’t have her license.  She starts to do what he says, but before she can get out there is a van blocking the garage door and at least one man in her home.  Once the man or men leave, she takes off to where her father told her to go and waits for him.   While she is waiting she hears that her father has been killed and that SHE confessed to her mother via email!  Not sure what to do, she goes on the run.

The book follows Alice on the Run and trying to find out what really happened because she knows for sure that it was not her who killed her father.

I wasn’t able to put this book down once I started it, I had to see who really killed Alice’s Dad – or if he even was really dead and why those files he told Alice to grab and take were really so important.

All that, and lots more, is explained in the rest of the book.  This is a young adult novel geared more for the younger crowd, but I do love to read these at times and since I had read Caroline’s books as a kid this was one I couldn’t pass up.  There are also some photos of Caroline at the end of the book which were interesting to see!

Falsely accused of her father’s murder, Alice is on the run for her life
Alice is at home painting her fingernails and ruminating on her parent’s divorce when she receives an oddly desperate-sounding phone call from her father. He instructs her to drop what she’s doing, take his car, and bring two computer disks to him at their favorite ice cream shack. Alice can’t believe her father wants her to take his precious Corvette, and she’s not supposed to drive because she doesn’t have her license yet. But he never gets the chance to explain—and he doesn’t show up to meet her. While Alice is waiting in the car, she hears on the radio that her father’s been murdered. She is sick with grief, knowing her father will never join her. And then the radio announces that someone has already confessed via email: Alice herself. Now Alice’s life has become a nightmare. Even her mother believes she’s guilty. How can she clear her name while she’s on the run? This ebook features an illustrated biography of Caroline B. Cooney including rare images and never-before-seen documents from the author’s personal collection.