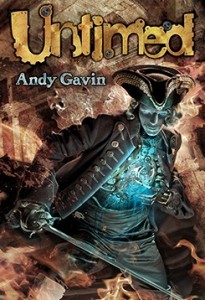 Romance. Action. History. This book has it all.  The book is about a boy named Charlie – who is seemingly invisible.  No one can remember his name – not even his MOM! She has to leave post it notes around the house to remind herself to call him Charlie.  He is frustrated also that he can’t get any girls to notice him – but hey when you’re seemingly invisible that’s how it works, right?

Things seem pretty normal until he ends up tumbling through a hole after a clockwork man and ends up leaving Philly and landing back in time in London!  Way back in time, 1725 to be exact.  There he meets Yvanie and she actually pays attention to him and remembers his name.  She is also traveling through time.  They hit it off but there is one big problem – she can only travel into the future and he can only travel in to the past.

There are some illustrations between chapters and a few during chapters too which kind of helps set the scene if you weren’t able to picture it yourself, or to help enhance the scene going on in your mind.

Overall this was a good read, though not the light and quick and easy read I usually pick out with my young adult novels.  What’s interesting is that this is probably in the genre of  ‘steampunk’, which I love visually in art but up until this book haven’t really read any books in this genre.  It is considered a Young Adult novel, but I wouldn’t let the younger range of the Young Adult range read it due to some language.  It’s not really bad, but just a few words here and there.  (You may want to read it yourself first and use your best judgement too – I don’t have kids so I may be totally off base with what they hear at school and the like!)

I received a free e-copy of this book in order to write the review and participate in the blog tour. I was not otherwise compensated.

Charlie’s the kind of boy that no one notices. Hell, even his own mother can’t remember his name. And girls? The invisible man gets more dates.

As if that weren’t enough, when a mysterious clockwork man tries to kill him in modern day Philadelphia, and they tumble through a hole into 1725 London, Charlie realizes even the laws of time don’t take him seriously.

Still, this isn’t all bad. In fact, there’s this girl, another time traveler, who not only remembers his name, but might even like him! Unfortunately, Yvaine carries more than her share of baggage: like a baby boy and at least two ex-boyfriends! One’s famous, the other’s murderous, and Charlie doesn’t know who is the bigger problem.

When one kills the other — and the other is nineteen year-old Ben Franklin — things get really crazy. Can their relationship survive? Can the future? Charlie and Yvaine are time travelers, they can fix this — theoretically — but the rules are complicated and the stakes are history as we know it. And there’s one more wrinkle: he can only travel into the past, and she can only travel into the future!

Andy Gavin is a serial creative, polymath, novelist, entrepreneur, computer programmer, author, foodie, and video game creator. He co-founded video game developer Naughty Dog and co-created Crash Bandicoot and Jak & Daxter. He started numerous companies, has been lead programmer on video games that have sold more than forty million copies, and has written two novels.His first book, The Darkening Dream, has been well-received by fans and critics alike. Publisher’s Weekly called it “gorgeously creepy, strangely humorous, and sincerely terrifying.” Untimed is an even more ambitious follow-up. It is a lavish production with a cover by acclaimed fantasy artist Cliff Nielsen and twenty-one full page interior illustrations by Dave Phillips.