December 31, 2012 by ConcertKatie No Comments 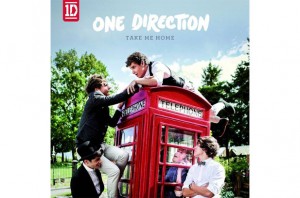 On November 13th One Direction released their much anticipated sophomore album, Take Me Home.  This CD seems to have a more even spread of singing by all 5 of the boys – where as the last CD seemed to be more focused on Liam and Harry.  I can hear more Zayn and solos from Louis and Niall on more songs on Take Me Home.

I have 2 versions of the CD – the yearbook edition that has a few extra tracks and I also picked up the Target edition that has 5 extra tracks (though 2 are just live versions of older songs.)  The funny thing is – I love the cover of the album and yet the 2 versions I have don’t have the cover pictured above.  The yearbook edition comes in a book and the Target edition cover is grayscale. Yes, I am thinking about getting a 3rd copy just to have the color cover. (#fangirlproblems)

The CD is good, very catchy and everything I’d expect a boyband CD to be – but it is also a little strange.  Some songs sound very much like songs that I could hear Big Time Rush singing and others sound more like Backstreet Boys songs.  I don’t know if One Direction has a distinct sound, yet, but it is just weird that so many songs made me do a bit of a double take while I was listening.   I’m not trying to be negative – I love all of the bands I mentioned.

I think my favorite tracks are Rock You and Nobody Compares – but ask me again tomorrow and I will probably tell you something completely different.   It is worth noting that 2 songs are cowritten by Ed Sheeran – Little Things and Over Again.  The One Direction boys also have writing credits on Last First Kiss, Back For You, Summer Love and Irresistible.

Top 6 shows of the year?
Maroon 5 Live on Letterman
Mixtape Festival
Jason Mraz
Hanson @ Disney
Honor Society NYC Cd Release
Recycled Percussion show #1
(I know I kind of cheated and if you think about it this is more than 6 shows but I’m in charge and I can do what I want!)

Last show of the year?
Recycled Percussion in New Hampshire

Most disappointing?
Javier at Ridgefield Playhouse – ONLY because of the a-hole behind me ruining things, nothing to do with the performers at all.

Venue most visited?
Perhaps Ridgefield Playhouse… but I really don’t feel like figuring it out. Or maybe the venue in Disney where I saw Hanson 6x.

Worst injury?
Bruise on my leg when AJ was behind me at the BSB show

Band seen the most?
Hanson – 9

Bands seen this year that also broke up this year?
SK6ers :*(

Friends made at shows?
Joyce & Melissa

Best souvenir from a show?
I finally got a pick at a show!

Longest time in line?
I don’t recall any long line waits – but we did have to wait like 2 hours before the K104 not so silent night started after being let in!

Top 5 best 2011 concert moments:
-Getting a 5th row seat for Maroon 5 Live on Letterman
-Getting the close handicapped spot for 3 of 6 Hanson shows at EPCOT
-Meeting The Wanted / 5th row for the concert (and a kiss from Jay!)
-Though bittersweet – seeing Stephen Kellogg and the Sixer’s final show
-Jonas Brothers being BACK!

Top 5 worst 2011 concert moments:
-John Mayer cancels his tour
-Not getting into the Wolf’s Den for Matt Nathanson
-Fight at the Javier Colon show
-Unable to see most of K104 show because of being in wheelchair and not front row
-Following The Wanted’s tour bus to the show and having them exit the bus while I was parking!