Book Review: At Every Turn

December 26, 2012 by ConcertKatie No Comments 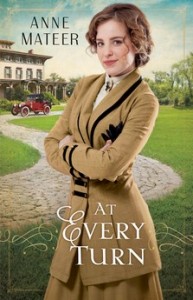 At Every Turn is a story about Alyce (Ally) and starts with her at church.  A couple comes back from Africa and tells about what they did to help the families over there. Ally becomes overwhelmed and pledges that she will give them $3,000 from her father to help them and encourages the rest of the church to match her offer.

But there’s one problem – her father doesn’t like that she is involved with the church and won’t give her the money. He tells her to try and raise the money on her own. All the ideas she can come up with, the rest of the church is already trying and she doesn’t want them to think that her efforts are going towards their matching.  She also tries to start a cab service, but no one wants to pay her to drive them anywhere.   Her other problem is giving the money she can raise to people in the community who need the money.

How is she going to come up with $3,000 in 7 weeks?  She loves to drive and realizes that her father has a car in an upcoming race.  She hangs out with his mechanic and drives with him and somehow convinces him to let her drive in the races.  Now, this book takes place in the early 1900s, so women racing is basically unheard of and they are not supposed to be anywhere near the track.  Somehow, the mechanic Webster agrees and she dresses like a male and races the car.  After doing well, she convinces Webster and her father to run another race and does well again.  However, her father is getting upset that he can not meet the driver so Ally has her suitor Lawrence say that he was doing the driving.

Meanwhile, Lawrence is also trying to tell Ally that Webster is no good and that she should not trust him with money.  Ally tries to go with her gut and trust Webster, but after she tells him to hold money she finds the box she gave him empty.

A lot of other stuff goes on too, but I don’t want to give everything away!

The book was really good – I liked how hard headed Ally was and how she was determined to do whatever she needed to get this money for the kids from Africa, even if it meant doing a job that women were not supposed to be doing.  Not only did she do it, but she hung in there longer than a lot of the men on the race track!

While some of the story was predictable, there were also some other twists and turns in it as well that I liked because it made me feel like it was worth it to read it at the end and that I hadn’t figured out everything.  The book was a quick and easy read.

I received a free book from Bethany House in order to write this review. I was not otherwise compensated.

Caught up in a whirlwind of religious enthusiasm, Alyce Benson impetuously pledges three thousand dollars to mission work in Africa. Now she just has to find a way to get the money.

Alyce harbors a secret passion for speed and automobiles, and she’s spent many an afternoon driving around the rustic track in the field behind her home. When she discovers that her father’s company has sponsored a racing car that will compete in several upcoming events–races in which the driver will be paid and could win as much as five thousand dollars in prize money–she conspires with her father’s mechanic, Webster, to train and compete.

But when her friends cast aspersions on Webster’s past, she realizes she may have trusted the wrong person with her secret. Will Alyce come up with the money in time, or will she have to choose between her hasty promise and the man who holds a piece of her heart?