December 5, 2012 by ConcertKatie No Comments 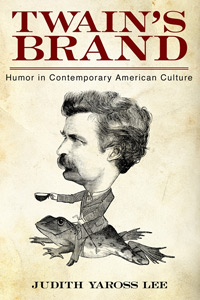 Twain’s Brand: Humor in Contemporary American Culture by Judith Yaross Lee looks at the humor that Mark Twain used and compares it to some ways it is still relevant and helped pave the way for comedies today.

Some of the more current comedies that are mentioned in the book are the TV shows Seinfeld (a show about nothing that shows how comedians come up with their material for stand up – by showing a contrast of Jerry’s life and clips of his stand up) as well as The Simpsons.  There are also several images from comic strips included in the book as well.

This book was certainly a lot easier to get through than Twain’s autobiography – a 700+ page book that I am still trying to get through. (I’m not sure I’ll ever finish it – although I was hoping to read it before visiting his home in Hartford.  Looks like I’ll be visiting whether it is done or not!)

I never really thought of Twain being still relevant today – but this book definitely opened my eyes to that.  Anyone who is a fan of Twain or interested in finding out more about his humor should definitely check out this book.

I received a free e-copy from the publisher through NetGalley in order to write this review. I was not otherwise compensated.

Samuel L. Clemens lost the 1882 lawsuit declaring his exclusive right to use “Mark Twain” as a commercial trademark, but he succeeded in the marketplace, where synergy among his comic journalism, live performances, authorship, and entrepreneurship made “Mark Twain” the premier national and international brand of American humor in his day. And so it remains in ours, because Mark Twain’s humor not only expressed views of self and society well ahead of its time, but also anticipated ways in which humor and culture coalesce in today’s postindustrial information economy–the global trade in media, performances, and other forms of intellectual property that began after the Civil War.

In Twain’s Brand: Humor in Contemporary American Culture, Judith Yaross Lee traces four hallmarks of Twain’s humor that are especially significant today. Mark Twain’s invention of a stage persona comically conflated with his biographical self lives on in contemporary performances by Garrison Keillor, Margaret Cho, Jerry Seinfeld, and Jon Stewart. The postcolonial critique of Britain that underlies America’s nationalist tall tale tradition not only self-destructs in A Connecticut Yankee in King Arthur’s Court but also drives the critique of American Exceptionalism in Philip Roth’s literary satires. The semiliterate writing that givesAdventures of Huckleberry Finn its “vernacular vision”–wrapping cultural critique in ostensibly innocent transgressions and misunderstandings–has a counterpart in the apparently untutored drawing style and social critique seen in The Simpsons, Lynda Barry’s comics, and The Boondocks. And the humor business of recent decades depends on the same brand-name promotion, cross-media synergy, and copyright practices that Clemens pioneered and fought for a century ago. Twain’s Brand highlights the modern relationship among humor, commerce, and culture that were first exploited by Mark Twain.

Judith Yaross Lee is a professor and director of honors tutorials in the School of Communication Studies at Ohio University. She is the author of Defining “New Yorker” Humor and Garrison Keillor: A Voice of America, both available from University Press of Mississippi.