Music Monday: Johnny Keyser From Where I Stand 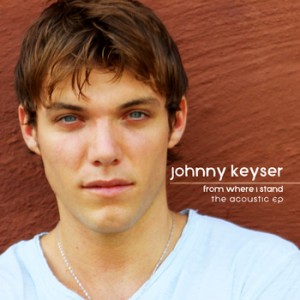 Probably the most anticipated CD release of the year, for me anyway, is Johnny Keyser’s acoustic CD “From Where I Stand.”  If you are new to Concert Katie – Johnny was a contestant on this years American Idol.  Unfortunately, he was cut REALLY early on even though many fell in love with him during his audition. (Or maybe that was just me and JLo?)  It was teased that he may come back as the 13th contestant – but then idol brought back Jermaine only to end up disqualifying him shortly thereafter. (lameee)

Anyway – after Johnny got kicked off, he went to work on his EP. It ended up debuting at #44 on Billboard’s Heatseekers chart – just 6 days after its release.  Johnny wrote on his website: “My EP went digital 6 days ago, we’ve done zero advertising, haven’t contacted any radio stations, and yet somehow I break on to the Billboard charts, which are driven in large part by radio play… All on the same day that America crowns their next ‘Idol’.”  Perhaps it wasn’t just me and JLo in love with him afterall.  Johnny is also the first American Idol contestant in the history of the show to hit the billboard charts with an Indie album before the end of the season they competed in.  Maybe you SHOULD have brought him back, huh Idol?  (Or maybe not. He might be better off on his own.)

With the exception of the final track on the EP… all songs are Johnny originals and they are all quite great! I think that my favorite is Selah.  The CD gives me a bit of a Gavin DeGraw vibe.  It’s all acoustic, but I’d love to hear some of these songs with a full on electric set up, I’m sure they would be even better than they already are.

From Where I Stand is available at iTunes, Amazon and http://johnnykeyser.bandcamp.com/