Book Review: The Psychology of Dexter 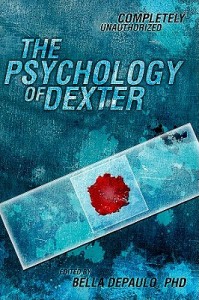 The Psychology of Dexter analyzes the hit Showtime television show through a series of essays written by various experts and fans of the show.  Dexter is a serial killer – but he has millions of people each week rooting for him.  Why is he so likeable compared to other killers featured in the show?  What is it about the character that has so many people drawn to him?

One chapter even compares everyone to Dexter.  It has a disclaimer before the essay begins – “If you want to believe that you have nothing in common with Dexter, do not read this chapter.” Is it true? Do we really all have a Dark Passenger in us like Dexter does? I think that we do – though perhaps some of us are just a bit better at hiding it than others.

While I’ve only seen the past couple seasons of Dexter, it was definitely interesting how the book took apart not only Dexter but other characters too, I’ve always been interested in Psych and things like this.  I probably would have gotten a bit more out of the book had I seen all the seasons though.

There are some other books in this series that analyze the Psychology of other TV shows, which I definitely think I need to check out. (And I may need to catch up on past Dexter seasons as well before it comes back in September!)  I would definitely recommend this book for any one who is a fan of or at the very least familiar with the TV show Dexter and has some sort of interest in psychology and analyzing serial killer characters.

Millions of us are fascinated by unlikely hero Dexter Morgan—a character who constantly makes us question what being “normal” really means. What makes Dexter tick? And what makes a show about a serial killer so appealing to those of us at home?

In The Psychology of Dexter 17 psychologists and devoted Dexterfans take on the show’s psychological complexities, analyzing not just the title character but also his family, coworkers, and even his viewers.

Think you know Dexter? The Psychology of Dexter will make you think again.