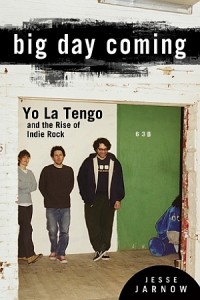 Big Day Coming is a book about the band “Yo La Tengo”, before reading this book the only thing I knew about them was that they got their band name from the New York Mets.  The story goes that Mets outfielders Richie Ashburn and Elion Chacon often collided on fly balls when Ashburn yelled out “I’VE GOT IT!”, a spanish speaking teammate suggested that Ashburn try saying “Yo La Tengo”, and it worked for Chacon, but then the other outfielder Frank Thomas collided with Ashburn…

The book tells the stories of Ira Kaplan and Georgia Hubley, their youth and how music became a part of their lives growing up as well as how they met and formed the band as a husband and wife duo. Both are from the New York area and a lot of the story takes place in Hoboken, so it was interesting to read about locations I know of or have been to, it made the whole story a lot more relatable and real to me, at least. (If you’re not from the area the descriptions of the clubs are great and I think you’d have no problem picturing them!)

When they first started performing they had a rule thart they would not repeat songs from performance to performance so they had to teach themselves a whole new set every time they were going to perform! This led them to learning hundreds of songs to cover during their performances.

Yo La Tengo officially began in 1984 and has been continuing ever since, though the band members have switched around a bit.  Eventually they started adding in original songs to their sets and not just new covers.  Ira and Georgia over the years became a good songwriting team.

The biography is definitely an interesting story and was a fun read.  Definitely recommended for anyone looking to find out more about the band or about the music scene in Hoboken 30 years ago.

I receieved a free e-copy of this book from the publisher through NetGalley in order to write this review. I was not otherwise compensated.

The first biography of Yo La Tengo, the massively influential band who all but defined indie music.

Yo La Tengo has lit up the indie scene for three decades, part of an underground revolution that defied corporate music conglomerates, eschewed pop radio, and found a third way. Going behind the scenes of one of the most remarkable eras in American music history, Big Day Coming traces the patient rise of husband-and-wife team Ira Kaplan and Georgia Hubley, who–over three decades–helped forge a spandex-and-hairspray-free path to the global stage, selling millions of records along the way and influencing countless bands.

Using the continuously vital Yo La Tengo as a springboard, Big Day Coming uncovers the history of the legendary clubs, bands, zines, labels, record stores, college radio stations, fans, and pivotal figures that built the infrastructure of the now-prevalent indie rock world. Journalist and freeform radio DJ Jesse Jarnow draws on all-access interviews and archives for mesmerizing trip through contemporary music history told through one of its most creative and singular acts.