August 3, 2012 by ConcertKatie No Comments 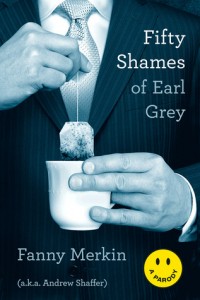 Fifty Shames of Earl Grey is a spoof of the popular Fifty Shades of Grey.  With all the talk surrounding Fifty Shades, I knew that I had to read Fifty Shames.  I was not disappointed.  The book is hilarious and pokes fun at the fact that Fifty Shades started off as a Twilight fanfiction with several references to Edward/Bella/Robert Patinson/Kristen Stewart/etc.

The story is very ridiculous – mocking the storyline in Fifty Shades and doing a great job at that.  I found myself laughing out loud on nearly every page.

I probably wouldn’t recommend this book if you haven’t read Fifty Shades yet, because a lot of the mocking will just go over your head if you don’t know what it is mocking.  But if you HAVE read fifty shades and find it as ridiculous as I and many other readers have, then I definitely recommend you read Fifty Shames.  While there is sex in Fifty Shames it is not written out in great detail as it is in Fifty Shades at all. It is just mentioned in passing for the most part, all while still mocking Fifty Shades.

The end of the book even has the list of what Earl’s Fifty Shames are. (Like Nickelback and The Olive Garden being 2 of them – lol!)

There is an excerpt of the next book – Fifty Shames in Space and I truly hope that this book does end up getting written (I am not sure if it was more mocking or if it seriously is going to become a book) because I could not put down Fifty Shames but at the same time I did not want it to end!