Book Review: What Do You Want To Do Before You Die? 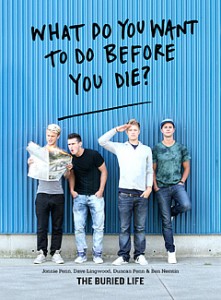 What Do You Want To Do Before You Die is the new book from the guys of the Buried Life – Ben, Duncan, Jonnie and Dave.  I first heard about the Buried Life from their TV show that was on MTV a few years back.  The show had me hooked – it was about 4 guys who are looking to complete their list of #100 things before they die.  They call themselves The Buried Life.  But in addition to reaching their goal – for every item they are able to cross of their list, they help a stranger cross an item off of their list.  Pretty neat.

Recently they wrote a book and are now trying to cross off another item on their list: Write a New York Times Bestseller.  Through various promotions and book signings they have been trying to boost sales – and I love the guys and am a sucker for “perks”, so when they posted that books bought on a certain day from Barnes & Noble would come signed – I was in.

The book is a weird size, and I thought it was going to end up taking me forever to read! It has a lot of pages.  What I didn’t realize though is that a majority of those pages are filled with drawings from people answering the question “What Do You Want To Do Before You Die?”  This is the question the guys ask everyone and it really makes you think.

Last year I saw Ben and Dave talk at Southern Connecticut State University.  I am not sure what they said but I left completely motivated.  Then… eventually I lost all motivation.  They said that in order to start crossing things off your list, you have to first write them down.  And I was all ready to write things down but then life got in the way.  I really need to take some time to myself and start a list.  Maybe not come up with 100 things right off the bat, but start small and work my way up.  And no one says my list HAS to be 100 things.

In addition to these pages with their question being answered – there are the stories about how The Buried Life started and some of the first things they did to get items crossed off the list (some of this was very similar to what they said at the school – but even if you saw them on one of their tours there is a LOT more content than just that in the book) but it also has stories from other people.

There was one story that stood out to me the most (not that they all weren’t wonderful). It was written by Bing Gordon.  I’m not sure I can summarize the story and do it justice – but I’ll try.  He was in class and asked about what he’d like to do.  He said he wanted to create something so that you could make your own characters and control them through a computer.  The whole class was silent, probably because they thought his idea was ridiculous.  After class the teacher pulled him aside and said that another student had answered similarly in another class.  He told him to meet with the other student.  The two ended up creating EA Games.  You probably are familiar with The Sims – which is made by EA, as well as many, many other games.

I think the moral of the story is – no matter how ridiculous other people might think your dreams are – if it is YOUR dream and you think that you can achieve it then you should absolutely go for it.  The Buried Life guys added “play basketball with President Obama” on their list and thought it was never going to happen (especially considering they are Canadians) but wouldn’t you know there is a photo of the 4 guys with Obama after having played some hoops with him?  They said that Obama liked them because they help others too.

I think the message is great – achieve your dreams and goals and help others too with what resources you might have that they don’t.

I purchased The Buried Life book for myself and decided to write a review for my readers. I was not compensated.