Book Review: Song of My Heart 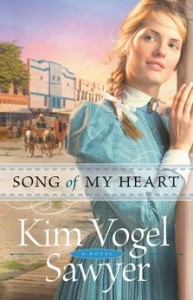 Song of My Heart by  Kim Vogel Sawyer is about Sadie Wagner.  When her (step)Papa is injured and unable to work, Sadie must help out the family.  Sadie’s cousin Sid says that if she moves from Indiana to Kansas he can get her a job as a store clerk and also possibly singing at the opera house.  Sadie’s parents agree to let her move to Kansas to work and be able to help take care of the family.

When she arrives, it seems like almost immediately there is a bit of a love triangle going on.   The sheriff, Thad, is into Sadie and it turns out the her cousin Sid, would also like to be her beau. (Sid is related through Sadie’s step father, so they are not cousins by blood.)  Sadie of course wants to be with Thad and not her cousin, but the two keep trying to get her to fall for him.

Meanwhile, Asa, the boss at the opera house (which is actually just a basement) wants Sadie to sing Tuesdays in addition to the Friday and Saturday she’s already been singing.  This is supposed to be on the hush-hush and only certain men from the town will be allowed.  This is because Asa has a bootleg operation going making alcohol and running a gambling operation while Sadie performs.  Sid is also involved as he is delivering alcohol for Asa, but since it is in bottles that say it is other kind of merchandise, he has no clue.

The story gets really good more towards the end with the love triangle, bootlegging and all that coming to a head and Thad catching Sadie and Sid transporting what they thought to be molasses but is actually alcohol.

You’ll have to check out the book for yourself to find out how it all turns out!

I received a free copy of this book from BethanyHouse in order to write this review.

Sadie Wagner has always been devoted to her family. So when her stepfather is injured and can’t work, she decides to leave home and accept a position as a clerk at the mercantile in Goldtree, Kansas. Goldtree also offers the opportunity to use her God-given singing talen – though the promised opera house is far different from what she imagined. With her family needing every cent she can provide, Sadie will do anything to keep her job.

Thad McKane comes to Goldtree to investigate reports of a bootlegging operation. Once he earns enough money from the sheriff work, he plans to use it to pay for his training to become a minister.

Thad is immediately drawn to the lovely young singer who performs in Asa Baxter’s unusual opera house. But when he hears her practicing bawdy tunes, he wonders if she’s far less innnocent than she seems. And when Sadie appears to be part of the very crimes That has come to investigate, is there any hope the love blossoming between them will survive?