January 19, 2012 by ConcertKatie No Comments 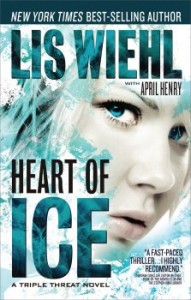 For a while I thought that this book was never going to arrive!  Usually my books from Booksneeze show up exactly a week after I request them.  This one took just over two weeks to get to me and I was losing my mind because the other reviews posted said this book was great and I had to see for myself!

Heart of Ice by Lis Wiehl with April Henry reminds me a bit of the Girl with the Dragon Tattoo and other books from that series.  I don’t know if it is just because the characters name is similar – Elizabeth.  Or what.  But the book is definitely full of action and it includes a bunch of characters.  It doesn’t take too long to catch on to who is who and who is dating who, etc.

The book also doesn’t spend a lot of time giving background information in the beginning, it really jumps right in to the drama, with more and more drama unfolding as you keep reading.  I really could not read this book fast enough, I think overall it took me about 4 hours and it is just over 300 pages. (57 chapters for those keeping score)  I just wanted to keep going and see what was going to happen.

I also love that the main people solving this drama were three strong WOMEN. Sure, they had guys helping them out here and there, but it is always nice to see women characters that can take car of themselves.  Cassidy is a TV Reporter who finds out some clues when her station’s intern goes missing and she really goes deep to try and find out what happens to her.  There is Allison the Federal Prosecutor and Nicole, an FBI Agent who is also battling her own battle with breast cancer while all this craziness is going on.

I would 100% recommend this book and I am looking to find more books from this author in hopes that they will be just as great!

Elizabeth Avery is a stunningly beautiful woman. But her perfectly managed exterior hides the ice cold heart of a killer. She ingeniously manipulates everyone who crosses her path to do exactly as she wishes–from crime reporter Cassidy Shaw, who thinks Elizabeth is her new best friend, to a shy young man Elizabeth persuades to kill for her.

As Elizabeth leaves a trail of bodies in her wake, Federal prosecutor Allison Pierce and FBI agent Nicole Hedges must piece together clues from seemingly unrelated crimes. Can they stop her before she reaches her unthinkable, ultimate end-game?