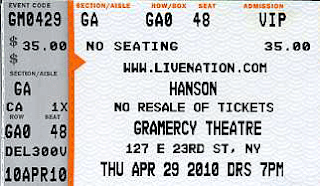 Tonight hanson played their 4th studio album, the walk in its entirety.

We had a girl who decided to scream bloody murder throughout the whole show so I decided tonight would be a good night for the ear plugs and they were amazing! It really was just like I turned the volume down on the place but I could still hear the guys singing, the cheers and even make out every word when the guys spoke.

The guys also replayed a few songs, so it made it easy to compare as I went without the ear plugs for the repeats. Definitely love the new ear plugs and for $11 everyone should get a pair!

Tonight was very high energy again and it was nice to hear Fire On the Mountain with the full band, previously I had only heard it as one of Zac’s solos.

I am exhausted and glad yet sad it will all be over tomorrow! Also, for some reason, everyone who walked by and needed to know what we were waiting for decided to ask me! I guess the girls in line all looked 18. Someone also asked if Hanson was those ‘little boys’ I told him they were old now. Some people had no idea what mmmbop was. Must be nice to live under a rock 😉

I also got another set of the 5 posters for a girl who couldnt make it to the shows and I’m a bit fascinated there were still any left if they were ‘limited’ to 150… Hmm maybe they weren’t as popular as I thought they’d be?