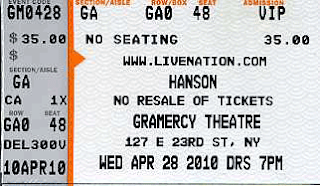 Tonight Hanson played in its entirety their 3rd album, Underneath (2004).  If you asked me, I would say it was my least favorite album of theirs.  However, it didn’t really occur to me until tonight just how many memories I have associated with the songs on this album.

Being front row in 2003 to the first show of the Underneath Acoustic tour and not knowing any of the words, Zac “dedicating” Broken Angel to me in Canada, being Reporter and getting them to play a whole ton of Underneath songs because they hadn’t been.  All the fun I had saying “HEY” on the off beat.  Rocking out to Lost Without Each Other.  The time Zac fell off his drumstool from headbanging too much. And I’m sure there are many more that didn’t come back to me tonight. (Before this album was released, I had been to 3 concerts. I am now at 44 – and I’ve heard Penny and Me 35 times just to show you how many Underneath-ish shows I have gone to HAHA)

Tonight they were definitely “on.” Way more so than last night.  Almost as much as Monday night. (I’m not sure anything will top the energy of Monday night)  Before the show started, we spotted Taylor’s wife and daughter in the reserved section.  Penelope had on a sequined jacket – for a 5 year old the girl has great fashion sense and I might need her to pick out some outfits for me!  We figured this was because she wanted to hear “Penny & Me” and before Taylor started it he said it was going out to a “special little girl” awww!

I was secretly hoping they would play “Love Somebody to Know”, it’s not on Underneath but it was on Underneath Acoustic.  Somehow, I have never seen this live.  After tonight, I still have never seen this live because they have yet to be “compelled” to perform an encore. Which is fine, but I’d still really like to hear it.  How I missed it on the acoustic tour, I don’t even know.. but I did.

My throat is killing me.  I totally over did it on Lost Without Eachother, but that is my favorite song of theirs (in recent time.) So upbeat, you just want to dance, clap and rock out. And scream, at the top of your lungs in my case I guess haha

A downside to the night was when Zac came out by himself for the encore to sing the bonus track, Lullabelle. It’s a slower, quiet ballad and girls were talking through it.  Not only were they talking through it, they were talking LOUDLY through it! Just LEAVE at that point if you so badly need to talk to your friend – it was the last song.  And I know that Zac absolutely HATES when people talk through his song so I am hoping he couldn’t hear them from the stage – but it was bad enough that someone else felt the need to yell out “SHUT UP” from the crowd.  Totally ruined that moment.

The Walk is up for tomorrow night – can’t wait!  (Although there won’t be any songs I’ve never heard until Friday night’s shows)