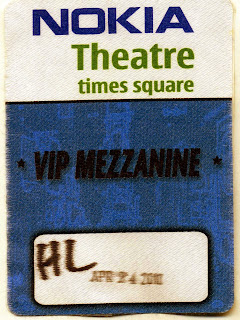 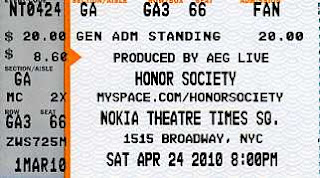 Last night was Honor Society’s “hometown” show of their Here Comes Trouble Tour.  Lauren, Christine and I took the 1:05 train into the city and made it to Times Square a little after 3pm.

I had won tickets, so we went to see if we were there but they had told me they wouldn’t have the list until 4:30.  We said hello to some friends and then found a spot in line.  We weren’t sure how we would find out about Soundcheck or Meet & Greet, but eventually a Nokia staff member came by and told us where to go.  My name was on the list for just 1 wristband but we had no problem getting Christine in with me.

We were let in to the venue and picked a spot at the rail in the second section of the Nokia.  They started by singing See U In The Dark, they also sang When I Come Home and Where Are You Now and answered a few fan submitted questions.  They also mentioned HANSON and that they had last been at Nokia when they won a contest to open for them.  I was glad they finally mentioned what band it was and Christine and I screamed for Hanson 😉

After they were done we all had to get lined up for the M&G, it was incredibly rushed because they had a ton of people to go through, we didn’t have time to say much more than hi to each other.  But Andy told me he would see me later LOL

We went back outside to see about our tickets, but the guest list was still missing. Once it arrived my name was not on the list and we had some communication problems when Honor Society’s manager said there was nothing he could do, so we bought tickets, only to get 2 from HS’s assistant shortly after.  To make up for the mixup she got us merchandise M&G wristbands to meet the guys after the show.

Christine and I had to get back in line, at this point Lauren was already inside and told us she was trying to win VIP tickets.  We met up with her and spent a really long time trying to win.  You were allowed to use every email address you had, so Christine had one of the girls who were typing in names while Ashley, Lauren and I had another, and the 3rd was working with other people.  Finally, Christine ended up winning with one of her email addresses. But we figured we would win, eventually, since we had pretty much monopolized the girls who were plugging in our information. We got 4 VIP passes and were able to go up to the VIP Balcony area, where there were seats! Yay!

By the time we got in, Ashlyne Huff was already about half way through her set.  Her single “Heart of Gold” was actually on the radio in a commercial a couple weeks ago and I had been trying to google the lyrics but couldn’t find anything.  Of course, I figured it out once she sang it! I am looking forward to her cd coming out on May 11!

Freestyle Steve, Timbaland’s DJ, was spinning in between sets – but it was a lot of rap/hiphop/whatever and that’s not really my thing.  It seemed to keep the girls in the crowd entertained and it did kind of seem to make the time go faster but I would have preferred to have been listening to something else.

Just Kait was out next and I sat against the back wall to keep my energy for when Honor Society would hit the stage.

The set lists were taped down and I took a picture of Jason’s with my super zoom and I was exciting Can’t Box Me In was on the list, but was pretty shocked that Rock With You and See U In The Dark were missing.  When they came out playing Rock With You we were confused.  Apparently the leg of Jason’s keyboard had cut off the first two songs!  I always hate taking pics of the set list in the beginning, because it ruins the surprise, but there was still a surprise! (Usually I take the setlist pic whenever I get the option though because you never know what might happen to it throughout the show lol)

I couldn’t see Alex for almost the whole show, because there was a curtain blocking the back of the stage from our view at the far corner of the balcony.  He came out to sing “Down” and “When I Get Home” so I made it my mission to get a couple good pictures of him – and I ended up with only a couple – the boy looked down for pretty much the entire song!

They brought out Ashlyne and Kait for Don’t Close The Book.  I was bummed I couldn’t see Alex during his solo on Nobody Has To Know (my favorite honor society song).  They closed out the night with Over You and Full Moon Crazy and just looking out in to the crowd to see how big it was compared to my first show at the knitting factory was amazing.  The venue held 2000+, and while it wasn’t sold out, it had to have been pretty close!

A highlight of the night was when Christine went to talk to Johnny Wright and got a bunch of NSYNC gossip from him!  We were all a little bit too excited over that haha.

Setlists for Ashlyne, Kait and Honor Society under the cut!

Honor Society’s set:
Rock With You
See U In The Dark
Here Comes Trouble
Two Rebels
Can’t Box Me In
My Own Way
Acoustic Medley
When I Get Home
Where Are You Now
Sing For You
Don’t Close The Book
Nobody Has To Know
Over You
Full Moon Crazy

I have to first write about our ride home from last night’s concert, and then later I will actually write about the show.

When we got on, there was a guy trying to leave down the aisle as we were trying to go down it. (He had a bit to drink, it seemed /sarcasm)  We sat all together in a row and then our drunk friend came back and was telling the people he was with about what he saw.

There were 2 guys who were naked a couple of cars up, apparently they had gotten sick on each other and decided to just strip naked? I don’t know.  Glad we didn’t end up in that car… although I think they were all a bit crazy.

The girl behind us seemed like she was about to get sick and we did not want to be there for that so we got up to move back a train car.  Except that when we made it to the next door, it had a paper on it and said “closed car” We were trapped.  And when we went back to our row, we had lost our spot because the group sitting near us decided to spread out.

The guy making the announcement of what station we were going to, didn’t even seem like he was speaking english… and then at 2am the announcements were just screeches and feedback.

“Finally” we reached the FIRST stop of the train – and about 200 obnoxious kids got on the train. The ticket taking dude even had to tell them to calm down because they were SCREAMING at each other.

Then when we had 1 more stop to go, someone pulled the emergency stop. So we got jerked around by the train and finally made it to our stop. I don’t even think this comes close to accurately describing the train ride – but I tried.  Just know, it was bad.

Note to self – try to avoid the 1am trains – ESPECIALLY on the weekends.